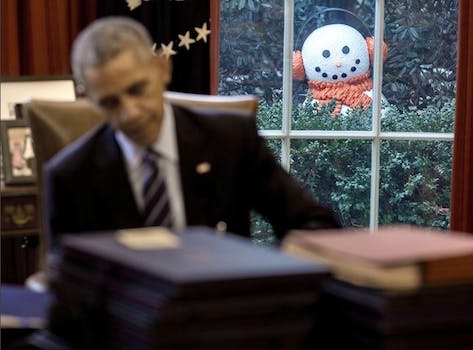 He doesn't mind being the butt of a joke.

Something ominous is headed toward the White House, and it’s the kind of unthinkable monster that could have dire consequences for the president and for the country as a whole. That’s right, it’s snowmen who can move and who have a keen interest in looking through Barack Obama’s Oval Office windows.

Proving that Obama doesn’t mind being the subject of a workplace prank, White House staffers moved the Rose Garden snowmen to look like they were spying on the president while he signed bills.

Thanks to official White House photographer Pete Souza and his Instagram account, we can see how Obama reacted.

All of which led the internet to one conclusion.