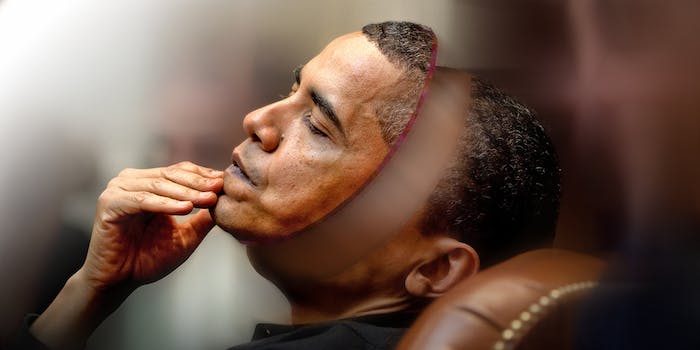 Is the Commander in Chief now the Entertainer in Chief?

Is the Commander in Chief now the Entertainer in Chief? Barack Obama has long been dubbed the “social media president” and no wonder: His campaign, and later administration, have revolved around social media. Viral videos, goofy photos, and casual “candids” carefully staged for viewers have been a critical part of his public presentation. He’s positioning himself not just as a president, but a celebrity—and one who has specifically used his meteoric climb to obtain celebrity status.

And yet, not everyone is a fan. In 2012, U.S. News and World Report‘s Peter Roff wrote, “Having watched helplessly as the murdered body of the U.S. Ambassador to Libya was recently dragged through the streets of Benghazi, it strains credibility to hear the president talking of, as CBS’s Mark Knoller posted today on Twitter, ‘promising to defend Big Bird to the death,’” criticizing the president’s attempts to be one of the cool kids as lacking in gravitas and respect.

While presidents past, like Reagan, may have brought celebrity to the White House, President Obama appears to be the first to recreate himself as a celebrity president. Is this a good thing? Historically, we’ve viewed presidents as benevolent overseers—and this accessible, user-friendly president may be reaching out to the younger demographic to break down the perceived distance of the presidency—but is he getting anything done between appearing on “Between Two Ferns” and doing Reddit AMAs?

President Obama started realizing the potential of social media back in his days as a Senator, and his attempts to connect with youth escalated during his campaign, when Organizing for America worked every possible social angle. Even the Obama Girl video, which the president reportedly wasn’t delighted with, went big, and helped his campaign bring it home. Writing mere days after the election in 2008, The Los Angeles Times’ David Sarno cut to the core of how adroitly the campaign used social media.

“Obama is no Bill Gates or Steve Jobs,” Sarno admitted. “And he’s no Mark Zuckerberg… Rather than being given to deranged leaps…of techno-insight, Obama’s tech talent is finding novel uses for available tools.” Much of his commentary proved prescient: He noted that Obama for America used YouTube, Twitter, and social networks extensively during the campaign and suggested this would continue in office—which, indeed, it has. He also explored the campaign’s promise to make the White House even more transparent and accessible than ever before.

Going viral was, in fact, a key part of the point for the President during his campaign—he traded on and counted on it to get elected. Looking to the younger generation, as well as a shifting media landscape and the value of digital communities, the Obama campaign focused on using these tools. The success of the campaign was due in no small part to its ability to exploit social media, turning all publicity into good publicity and making the candidate seem like a fun, funky guy whom members of the public could relate to. The same digital strategy carried the day in 2012, too.

Speaking to this, media psychologist Dr. Pamela Rutledge says that:

The increasing use of social media demonstrates to people the power they have as individuals to make a difference increasing both individual and collective agency. Obama’s group tapped into this increasing sense of political empowerment to generate support in spreading the word, encouraging other voters and raising funds. Social media and text messaging create opportunities for individual involvement that feel personal.

Obama’s not your pal, but he knows how to make you feel like he is.

This was borne out with a radical redesign of the stale, dusty whitehouse.gov as soon as Barack Obama took office. Instead of being a static site with poor design and a series of bad links, it became a living, breathing entity. Users could hit the photo and video section for rich digital content, the president switched his radio address to a YouTube commentary, and he started changing the way Obama interacted with the press—and the public.

Historically, the president has been a staid figure, with limited access for members of the general public. He’s dealt with respected, old-guard media organizations through press officials and other intermediaries, appearing occasionally for press conferences and other events. The American public’s view of the president has been mediated through the lenses of AP photographers, reporters, and opinion commentators, with rare, sanitized personal glimpses courtesy of First Ladies who pull back the curtain a bit.

That all changed with the Obama Administration, when the president started turning away from traditional media. Washington Post columnist Chris Cilizza sees Obama’s move as a deft exploitation of shifting media models:

Obama and his team are big believers that the fracturing of the mainstream media into a thousand niche sites has fundamentally altered how—and with whom—he should spend his time. Every president up until Obama spent most of their time talking with – and leaking information to—the “big” newspapers (WaPo, NYT, Wall Street Journal, etc.) and the networks (CBS, ABC and NBC).

Now, the president appears on The Daily Show and pops up in viral photos. The press office releases photos of him caught in the web of a tiny (and admittedly adorable) Spider-Man, he jokes that he’s Superman, and on the White House YouTube channel, you can see him taking a spring stroll. President Obama wants to be your friend, not just your president. He’s the cool dad.

Obama fans have caught on to his social media presence as well, exemplified by phenomena like Barack’s Dubs, which cut together the president’s speeches so he can cover songs like “Call Me Maybe” and “Fancy.” While the president has always been a subject of political cartoons and commentary, the digital era has brought about an entirely new round of presidential entertainment. By and large, Barack Obama seems both aware of and okay with it, as demonstrated by his embrace of digital media as well as comments made about it.

He’s not the first to get into his public role—take a look at Bill Clinton and his sax—but he is the first to plunge into his role as a celebrity in a way that no other president has done before. Even as trailblazers like Herbert Hoover (yes, really) opened up the White House to the press and the public (and let us not forget Andrew Jackson and his big block of cheese day), no president in the past has explicitly claimed an identity as a celebrity, either during the campaign or in office.

Of course, that very role allows the president to smoothly slide past the fact that he may not be doing as much for the American people as presidents past. Even as the president’s ardent fans wait to see where he’ll pop up next, like screaming crowds that followed The Beatles, the one place he seems to be found less and less is in an actual position of governance. He’s allowed an obstructionist Congress to block social reform, he’s struggled to distinguish himself in the foreign policy arena, and he’s overseen a time of limited social change in a nation struggling with a recession and a widening gulf between haves and have-nots.

While some of this is the result of legacies he was left with, some of it is also his responsibility—eventually, the cool dad needs to drop the act and turn this car around.

Has Obama changed the way Americans relate to the president, and created the notion of the celebrity president? Absolutely—and future candidates as well as presidents will need to take the lead from him if they want to succeed, something potential frontrunners are already recognizing. (Hillary Clinton, for example, is definitely revamping her image to make herself more accessible.)

Is that a good thing? I’m not so sure, because despite claiming to have made himself more accessible, the president still keeps a large number of secrets from the public—and if he’s too distracted by his celebrity to get work done, I’d much rather have the old, stodgy, uncool dad back.