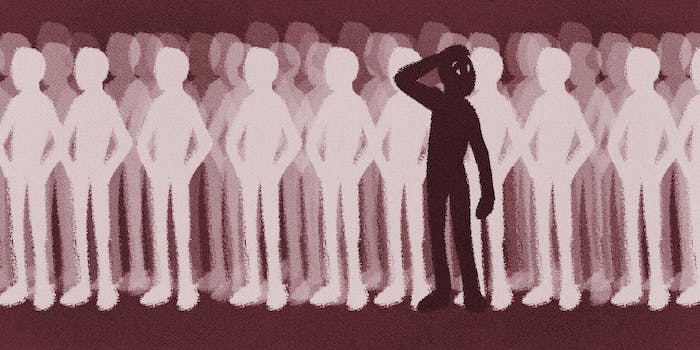 If the report about 'missing' black men isn’t a wake-up call, what is?

If the protests in Baltimore haven’t made you aware that many black men are “missing” from society, there’s a good chance it just simply wasn’t on your radar. More than likely, with the exception of public figures, it’s because they aren’t a substantial part of your everyday reality.

But in a society where the lives of black people, let alone black men, aren’t regarded with the same value or importance as their white peers (hence the hashtag #BlackLivesMatter), the findings of a recent report from the Upshot may very well raise awareness about a generational issue.

An estimated 1 in 3 black men in the United States will go to prison at some point in their lifetimes.

Of course, these figures are a matter of racism—not an occurrence by happenstance or as a mere byproduct of interpersonal biases, but structural and institutional levels of discrimination. Along with a number of other contributing factors, the Upshot cited early deaths and mass incarceration as two major driving forces. Historically, both of these deplorable social conditions have disproportionately affected black men, especially as it pertains to policing. Freddie Gray‘s death only serves to further underscore this point.

According to a report from the Department of Justice, an estimated 1 in 3 black men in the United States will go to prison at some point in their lifetimes. Even further, as an infographic from the American Civil Liberties Union shows, 1 in every 15 black males is currently behind bars—compared to that of 1 in 106 white men.

And as information cited by the Center for American Progress highlights, black women are three times more likely than white women to be incarcerated. With black (and brown) people disproportionately targeted for police stops, searches, the use of force, or arrests, it’s virtually undeniable that the criminal justice system remains riddled with racial disparities.

The current moment of media attention and activism, connected with the persistent trend of unarmed black people killed by police officers, should be enough to pique serious interest in elevating consciousness around racism. But for some, those deaths and the rallying cries both in America’s streets and on social media, hasn’t been enough of a wake-up call from a post-racial slumber.

After almost a year of ongoing protests and steady (but oftentimes reductive) news coverage, a Harvard survey of voters between the ages of 18 and 29 showed 81 percent of black people and 59 percent of Latinos support the #BlackLivesMatter protests. However, an alarmingly low 37 percent of young white voters expressed support.

For some, those deaths haven’t been enough of a wake-up call from a post-racial slumber.

Thirty-seven percent. The figure in itself raises many questions, assuming it’s indeed an accurate reflection of what young white people are thinking.

For starters, why haven’t young white people been moved in larger numbers towards supporting a movement that affirms the value of black lives? If not circulating videos of black men and women getting beaten or shot by police officers, or viral hashtags that underscore just how differently law enforcement officials treat whites and blacks, then what will it take for young white people—and all white people—to understand that this current moment isn’t the exception but, rather, the rule? Because, for a while now, the disparate treatment from law enforcement has simply been a matter of everyday life. That includes the more recent reports about black men being “missing” from society.

As history professor Peniel E. Joseph noted at the Root, the analysis from the Upshot didn’t necessarily reveal anything new, but the current moment has given way to renewed curiosity about the conditions that negatively affect life trajectories for black people, including the “disappearing” black men. In particular, Joseph pointed toward economic changes and policy enactments that trace back 50 years as a way of understanding the ongoing trend as it relates to mass incarceration.

In the aftermath of 1960s-era civil rights victories, African-American men fell victim to global economic shifts that turned major cities into postindustrial wastelands. Jobs, tax bases and opportunities shifted to the suburbs, out West and overseas, leaving behind a desperate, largely unemployable, surplus labor force. The war on drugs added grave and enduring insult to this pre-existing injury, trapping hundreds of thousands of black men in the bowels of the new American gulag. During the 1980s and 1990s, the black poor was labeled a new racial “underclass,” even as prominent scholars, most notably sociologist William Julius Wilson, insisted that the disappearance of work, more than black behavior, was at the root of the economic misery that contoured African-American inner cities.

According to Human Rights Watch, of all American adults arrested for drug offenses from 1980 to 2007, 1 in 3 were black. That’s despite African-American people comprising of just 14 percent of drug users, per information cited by the Center for American Progress. In other words, black people who are already disproportionately targeted by law enforcement also get arrested more for drug-related offenses, including possession of substances such as marijuana. White people have been more likely to sell drugs than black people, according to Brookings, but black people are still more likely to get arrested for similar drug crimes, including nonviolent offenses.

What will it take for young white people—and all white people—to understand that this current moment isn’t the exception but, rather, the rule?

This is just part of why, as researchers and observers alike have noted, white people and black people in America live under two distinctly separate realities as it relates to law enforcement. It’s not only about black life ending after the use of excessive, lethal police force, but also about life chances stunted behind prison walls. No longer can it be said that escaping police harassment, brutality, or imprisonment is simply a matter of acting as a model citizen. That may work well for white people. But black folks, whether they’re walking down the block, driving up the street, or simply trying to get help from police, already know better than that.

As for black men “disappearing” from everyday life, it will take major paradigm shifts, including an outright affirmation of the value of black lives, for the coming generations to possibly mark their return.