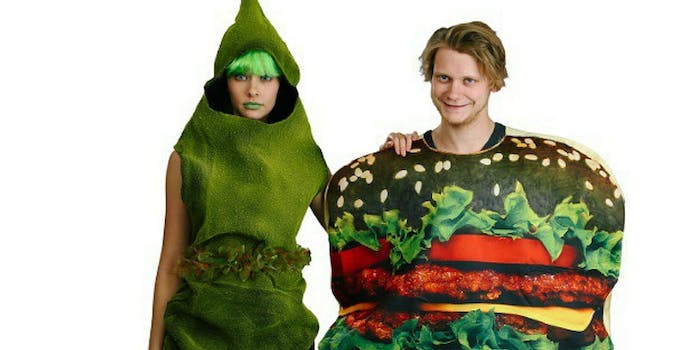 Yeah, this costume kind of stinks.

If you don’t mind getting your hands dirty for Oct. 31, HalloweenCostumes.com has an idea that will make you the messiest, yet possibly sexiest patron at your local Halloween party.

It’s a combo costume (the No. 2 combo, obviously) that includes the Halloween-themed black bun Whopper from Burger King and the green poop that was sure to follow. Not only is it a green poop costume you can assemble in less time than it takes you to digest the 660-calorie burger, but it’s also supposedly sexy.

The scatalogical meme emerged earlier this month, when Burger King patrons began posting on social media that the Halloween Whopper was turning their fecal matter a frightful color.

I had a black whopper yesterday, today my poop is green as Piccolo. I will not be eating another black Whopper. pic.twitter.com/1LzrJKoNDs

My stool is bright green. Even my poop is spooky because of that damned whopper. Never again! @BurgerKing pic.twitter.com/1xDmVG873R

Some, in fact, showcased their actual stool sample to prove it to all of their Twitter followers. Eventually, #GreenPoop began trending, and Burger King found itself in a sticky situation.

And just in time for Halloween.

So, how do you go about creating a sexy poop costume? As HalloweenCostumes.com—which added a photo of everything its models used to create the masterpiece—explains, “To attempt this rather ‘corny’ Halloween costume for yourself, you’ll need to get a little creative. (A poop tunic doesn’t exactly scream sexy.) But by adding accessories, like a belt to cinch the waist, a pair of high heels, and some fishnet stockings, you’ll be well on your way to making fellow Halloween party-goers’ cheeks ‘flush!'”

If, however, this costume doesn’t pass the smell test, and you want to move in a different direction, here are more instructions on how to dress up like your favorite meme.

Either way, try not to make too many poop jokes. You don’t want something silly like that smearing your reputation.