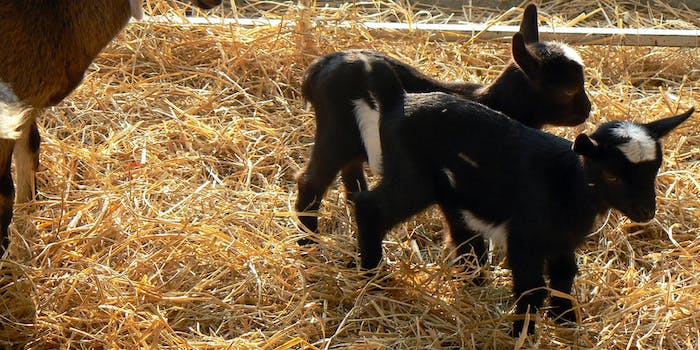 Photo via Benny Mazur/Flickr (CC BY 2.0)

Who wouldn't want to spend a month herding some goats?

Caromont Farm in Esmont, Virginia, was looking for someone to help out this winter. They have a herd of approximately 120 goats, and, as they write in the job posting, “kidding season” (when baby goats are born) is fast approaching.

Seeking Assistant Goat Herds(wo)man in Training
Kidding season is fast-approaching and we are looking for an animal-loving intern to join our team in mid-January. He or she will assist our farm manager in handling our herd of around 120 goats, which includes:

Breeding, birthing, milking, feeding, hay procurement, keeping the barn, milking parlor, and sheds clean and warm, tending to herd health, including worming and hoof-trimming, and assisting with other building and maintenance projects as needed.

It seems like a great job for a local person who loves animals, or maybe a kid from the University of Vermont who’s looking to try something different and doesn’t know what “worming” means.

As it turned out, the farm was slammed with applications from all over the country, and it quickly filled all of its herds(wo)man slots.

The farm’s owners must have been completely baffled.  Do people really love goats that much? How exactly did this happen?

Well, it probably started with the picture they chose to accompany the ad.

Here we see a pretty young woman surrounded by goats that seem to love her. It’s a fairly idyllic image; perhaps it came from the farm itself.

That’s when the Internet got involved—not the cozy corner of the Internet where Caromont Farm innocently posted the job opening, but the big Internet, The Internet with a capital “T.”

Someone, somewhere, saw the ad and decided that what the farm really wanted was not a “Herds(wo)man” but a “Baby Goat Cuddler.” Suddenly, everyone—and we mean everyone—was running a story about how you could quit your job and become a professional snuggler.

Even ABC News got in on the act:

The thing is, at no point does the ad mention anything about cuddling or snuggling with baby goats. It doesn’t specifically forbid it, though, and apparently that’s good enough for most people.Here are the actual qualifications the farm sought in its applicants:

If you were hoping to spend the rest of winter surrounded by the loving warmth of tiny goats, too bad. On the plus side, you probably learned something today—apparently goats, even baby ones, speak Spanish.