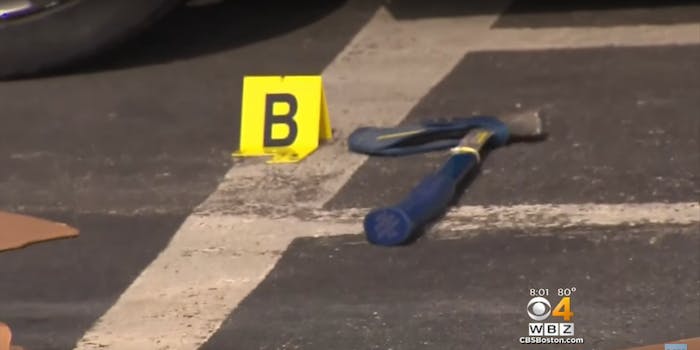 Waving an axe around is not the best way to convince a radio station to play your request.

There’s no better feeling than cruising around in your car and having your favorite song suddenly come on the radio. But you can’t force it. It has to happen naturally. You can’t, for instance, go down to the local radio station with an axe and demand that they play “My Axe” by Insane Clown Posse.

Yet that’s exactly what 38-year-old Richard Newton did on Monday afternoon. Police were called to the offices of the Kiss 108 radio station in Medford, Massachusetts at around 1:30 pm after Newton, brandishing an axe, approached a secretary and requested the song. He then returned to his car, perhaps expecting to hear the tune.

Instead, he was surrounded by police.

Police tried tasing Newton, and even shooting him with a beanbag, but to no avail. A witness told CBS Boston that the police negotiator even offered to get the ICP song played on the radio station in question which, it should be noted, is a top 40 pop station.

Newton threw the axe, along with several large knives, out of his vehicle, but still refused to surrender, at one point saying, “I guess you’re just going to have to kill me.” Eventually, after over three hours of tense negotiations, Newton finally gave himself up.

“It was a peaceful resolution for everyone involved, ” said Lt. Joseph Casey of the Medford Police Department. “Nobody got seriously injured, and we’re grateful for that”

Newton, who witnesses say was drinking beer and huffing something from a bag, has yet to be charged with a crime and will undergo a psychological evaluation.