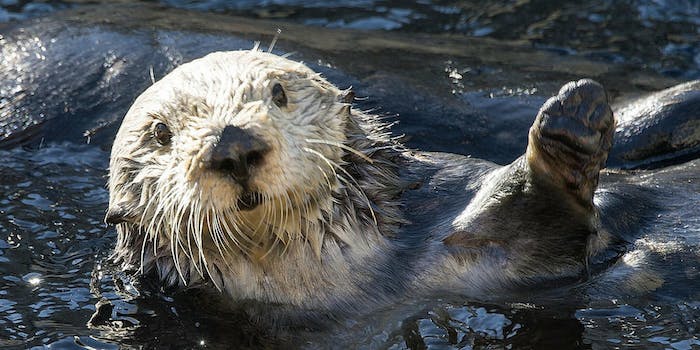 When otters lose, we all lose.

Right up front, we need to make a few lists.

With the above rubric in mind, please watch this video.

UNACCEPTABLE. This is a flagrant violation of the above bylaws of nap-waking decency. Sea otters can’t be on fire, because they live in the water, and they have no concept of time because, unlike John Mayer, they can’t read watches. Thus, there is never an acceptable time to wake an otter. And this waking? Particularly heinous.

This otter could have been dreaming about finally kissing that otter she had a crush on in otter high school or telling that terrible otter boss it had at the Otter King to go shove it. Or it could have been dreaming about nothing, and it just needed a nap because it was out catching up with otters it hadn’t seen since college the night before. The point is, the garbage human in this video has no idea why the otter is napping or what’s going on in its adorable little otter head. He is in no position to safely and humanely wake this otter.

Beyond that, this otter could have drowned!

Can you imagine sleeping on water and getting poked in your belly like you’re the Pillsbury Dough Boy? What a nightmare! I can swim, and would likely survive that scenario, but again, this guy doesn’t know this otter. That otter easily could have failed her swim test years earlier, fought savagely with her father about going back to swim class, and never even learned how to doggy-paddle. If that were the case, this otter would have drowned.

And for what? Just so some yokel on a catamaran could yuck it up with his girlfriend? Disgusting.

Who is this “man” willing to attack nature so blithely? My only suspect is noted documentarian and nature-abhorrer Werner Herzog, but without more evidence, we’ll never bring Mr. Herzog or whichever of his disciples is responsible for this action to justice.

Look. There’s a reason this video is on LiveLeak, the Internet’s repository for videos too dark and inhumane for traditional platforms. This is worse than a snuff film. Honestly, though, this video goes way too far even for LiveLeak. If otter torture isn’t in your Terms of Service contract, you’re an irresponsible provider of content and you should be shut down.

Frankly, the immorality of this situation extends to you, the reader of this article. Did you laugh at the otter? Did you? Then you’re no better than whatever Herzogian monster committed this atrocity. And neither am I. But mostly the blame falls on you, the reader. Your penance? Watching this other video of an uninterrupted otter.