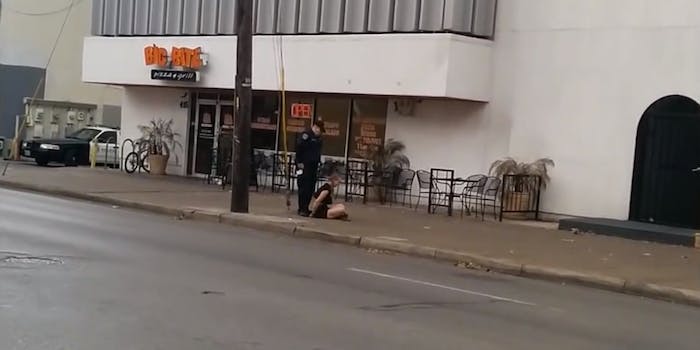 Throwing gas on the fire.

The police chief of Austin, Texas, is running damage control after downplaying a controversy surrounding a jaywalker’s arrest by comparing the incident to sexual assaults by officers in other cities.

“Whew! In other cities, cops are actually committing sexual assaults on duty, so I thank God that this is what passes for a controversy in Austin, Texas,” Chief Art Acevedo said in a heated press conference on Friday after a video of a jogger being arrested after jaywalking went viral on YouTube.

The statement only fanned the fire against the Austin Police Department, forcing Acevedo to issue a formal apology.

Yesterday’s press conference related to the arrest of a jogger by members of the Austin Police Department (APD) was the culmination of an emotional week for the APD, our extended APD family and me personally.

During the press conference I attempted to place the arrest into context by bringing attention to the fact that law enforcement deals with many acts of serious misconduct. This includes recent instances in the news of sexual assault by police officers in other cities.

In hindsight I believe the comparison was a poor analogy, and for this I apologize.  I stand committed to transparent leadership and will continue to engage the community we serve in an open, honest, and timely manner.

It all started Thursday when Amanda Jo Stephen, 24, allegedly crossed the street illegally while jogging in the area of the University of Texas campus. An Austin police officer yelled at her to stop so he could give her a citation for jaywalking, but she kept jogging and he gave chase. The pursuit was quickly joined by a second officer.

When one officer caught up to Stephen, who was wearing headphones, he grabbed her arm, causing her to jerk away from him. The officer then grabbed her and placed her in handcuffs. Chris Quintero, who was having coffee at a nearby Starbucks, saw the incident unfolding and started recording it. He later wrote about it in a post on his blog that was widely shared in Austin and elsewhere via Reddit.

Stephen refused to give her name to police and can be heard shouting in the video, saying, “I didn’t do anything wrong!”

Meanwhile, the officers wrestled her into the back of a police cruiser. She was later charged with failure to identify herself. Many who saw the video were outraged by the show of force, given the minor nature of her alleged crime. They also pointed out Stephen likely didn’t hear the officer’s commands because she was listening to music and was startled when her arm was grabbed. There’s been conflicting statements from police and passersby about whether the officer was behind Stephens when he grabbed for her or beside her within view of her peripheral vision. Regardless, she remained uncooperative once it was clear she was dealing with the police.

Stephen was one of 28 people stopped for jaywalking on Thursday during a pedestrian traffic initiative. Seven were cited.

Acevedo hosted a press conference on Friday to defend the actions of the officers. That’s when, apparently agitated, he made the statements for which he later apologized.