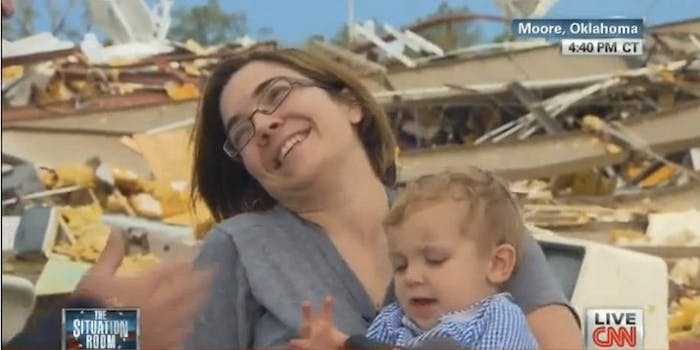 The key to a successful Oklahoma fundraiser: Atheism

Using the banner and hashtag #AtheistsUnite, an Indiegogo campaign is raising money to help Rebecca Vitsmun, whose house was destroyed in the massive tornadoes around Moore, Oklahoma. It was started by comedian Doug Stanhope, who watched awkward comedy unfold when CNN correspondent Wolf Blitzer interviewed Vitsmun, an atheist.

In a long clip, Blitzer stiltedly asked her “Do you thank the Lord?” for deciding to leave her house before it collapsed. Vitsmun smiled and politely responded, “I’m actually an atheist.”

More than 1,600 people have donated. As of this writing, Stanhope’s goal of $50,000 has almost been met, and money keeps pouring in. Stanhope’s page is riddled with jokes mocking religion, promising those who give $50 a “get-out-of-hell-free card” and $5,000 for “full access to God’s planbook.”

That’s not quite the tone Vitsmun took, who also told Blitzer, “I don’t blame anybody for thanking the Lord.” But there’s no denying the fundraiser’s effectiveness. Indiegogo is absolutely riddled with generic, well-meaning fundraisers for Oklahoma victims that have raised little to no money.

That stands in stark contrast to the Red Cross’s highly effective text-messaging campaign, which still dwarfs most online fundraisers.

“It’s important that our community shows that we have your back when you come out publicly as an atheist,” Stanhope wrote.

Remarkably, his fundraiser isn’t the only pro-atheism fundraiser to invoke Vitsmun’s name and promise to give her the proceeds. The Oklahoma Freethought Convention is selling T-shirts that say “I’m actually an atheist.” The site shows an illustrated model wearing the T-shirt, shrugging.