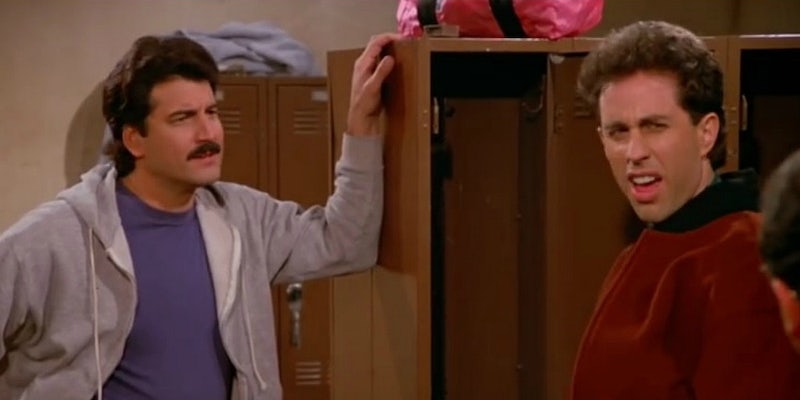 It's really a letter about nothing.

So what’s the deal with people trying to fool advice columnists with old Seinfeld plots and then actually succeeding (and, frankly, getting some good advice)?

If you’re a Seinfeld fan—and probably even if you aren’t—you’ve probably heard of the two-part 1992 episode entitled “The Boyfriend.” It featured former New York Mets first baseman Keith Hernandez befriending Jerry, courting Elaine, defending himself for spitting on Kramer and Newman, and eventually asking Jerry to help him move furniture.

One prankster who couldn’t seem to stop living in the 1990s decided to ask Ask Amy for a solution to his—well, Seinfeld’s—problem.

Dear Amy: I recently ran into a famous local sports figure at my gym.

I didn’t want to bother him but much to my surprise he approached me. Turns out he knew me from my profession. He asked if I wanted to go out for coffee and we exchanged numbers. A few days later we had coffee and I thought it was pretty cool that he considered us friends.

Then everything changed. He told me he was interested in taking out a woman we ran into. She is my ex-girlfriend and we’ve remained good friends. He asked me a couple of times if I wouldn’t mind if he asked her out. I reluctantly said no. I made plans with him, and then after talking to my ex I found out that he ditched our plans to go out with her.

The next day he called me and asked if I could help him move some furniture. I barely know the guy, next thing he will be asking me to drive him to the airport. Two friends of mine warned me not to trust this guy. What’s the deal—am I being too rash or should I dump the guy as a friend? — Feeling Foolish

Dear Foolish: The good news here is that you won’t have to dump the guy as a friend because he is not a friend. He’s an opportunist who just keeps asking you for stuff. I suspect that when you turn down his generous offer to let you move furniture for him, you’ll likely never hear from him again.

The letter has been taken down, but Ask Amy—aka Amy Dickinson—seemed to take the prank in stride.

“Every once in awhile, I get punked by a villainous, fun-loving reader,” Dickinson wrote on her website. “I have some affection for these episodes because I often think that if I didn’t actually have a job, punking advice columnists is exactly what I would do with my time. But alas I do have a job and so I am left with the task of sharing my humiliation, as well as trying to enjoy readers’ reactions. Honestly, I can’t believe I missed this one, because I have absorbed enough Seinfeld episodes to power a parallel universe of columns based only on Seinfeld plotlines.”

The original letter, the response, the addendum by Dickinson. It’s all so very perfect. Or, to put it another way: It’s gold, Jerry! Gold!