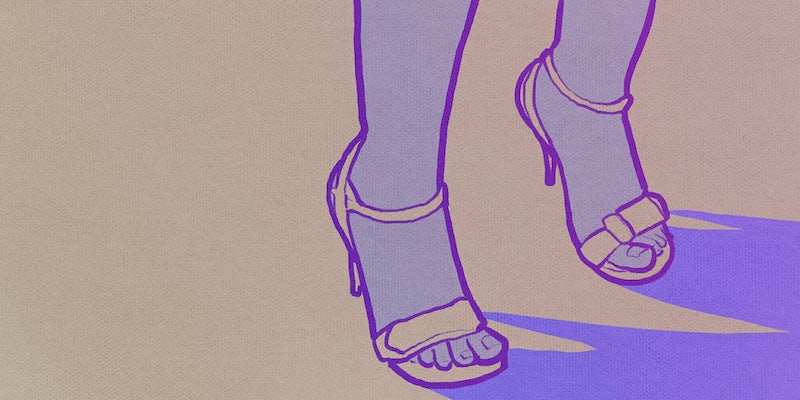 From Ashley Madison to the Rentboy.com raid, slut-shaming has gone viral.

So sang Trekkie Monster in the Tony-winning Broadway musical Avenue Q. Though an irreverent—and basic—summation of the Web, it was certainly apt when the show opened in 2003. Not only was a virtual cornucopia of kink available at the click of a mouse, but the Internet was rapidly changing the way people sought and found sex. Sites like Match.com and eHarmony expanded the dating pool for straight people. Gay.com and AOL chat rooms provided LGBT folks a means to connect with one another in ways never before possible. Message boards and Livejournal allowed people to openly discuss everything from STIs and consent to BDSM. The interfaces were rudimentary by today’s standards, but the sheer scale of the dialogue was revolutionary.

Two websites, in particular, were at the forefront of subverting sexual norms online, and both now find themselves as the focal point of a global debate about sex in the digital era. Ashley Madison, a site founded in 2001 to facilitate adulterous affairs, had its database hacked and users’ private information leaked. On Tuesday, Rentboy.com’s New York headquarters were raided. Several of its employees, including its CEO, were arrested for “promoting prostitution.”

The more things change, the more they stay the same. The Internet may have broadened the conversation about sex, but our morality surrounding the human body has remained largely static. According to author Sallie Tisdale, it’s led to “a change of visibility and accessibility”—but “it doesn’t change the fundamental nature of sexuality” or how we view it. In an eerily prophetic 2013 interview with Salon, she predicted the devastating events of the past year, arguing that the “erosion of privacy [online] is devastating to many people.”

The interfaces were rudimentary by today’s standards, but the sheer scale of the dialogue was revolutionary.

That phenomenon has led to a Web culture of rampant slut-shaming, which we’ve seen play out in real time. From harassment to humiliation, victims of revenge porn face a plethora of challenges, not least being the virtually impossible task of regaining control of their images. The release of celebrity sex tapes without consent predates the Internet, but mobile technology has made occurrences like “The Fappening,” a massive leak of stolen intimate photos of celebrities, more frequent and pernicious. And these incidents can have incredibly grim effects: Canadian police are investigating a possible link between the Ashley Madison leak and two suicides.

Digital slut-shaming is as old as the Internet itself. Just ask Monica Lewinsky, who gave a powerful Ted Talk earlier this year about her own experiences being the Internet’s “Patient Zero” when it came to celebrity sex scandals. After the former White House intern’s affair with former President Bill Clinton first appeared on the Drudge Report, she “became a national laughingstock,” according to the New York Times. Lewinsky said she was branded “a tramp, tart, slut, whore, bimbo, and, of course, That Woman,” and the scandal forced her into isolation: “You’re looking at a woman who was publicly silent for a decade.”

Lewinsky isn’t the only one to have her private affairs turned into public scandal. In 2003, a selfie of Chris Bryant, a member of British Parliament, in his underwear began circulating among the tabloid press. Six years later, after being promoted to a high ranking government position, the Daily Mail was still trotting out the image to discredit him.

These incidents can have incredibly dangerous effects: Canadian police are investigating a possible link between the Ashley Madison leak and two suicides.

However, what made Lewinsky and Bryant’s cases notable is that they weren’t everyday people—like those being hacked on Ashley Madison. Lewinsky had a sexual relationship with the POTUS. Chris Bryant was—and still is—a well-known politician. Being an Average Joe used to allow you protection; in an AOL chatroom circa 2003, I was just AbercrombieBoi2004. However, social media sites like Facebook have slowly eroded away that veneer of privacy.

If Lewinsky believes that humiliation has become a “commodity,” it’s thus more lucrative than ever in today’s Internet—as everyone becomes a target. It’s what NPR’s Temitayo Fagbenle described as “the new scarlet letter,” a direct reference Nathaniel Hawthorne’s novel about the puritanical policing of sexuality in colonial Massachusetts. (The protagonist, Hester Prynne, is forced to wear a scarlet A after her adulterous affair.) People, often young women, who have been filmed or photographed in intimate situations are shunned, ridiculed, and bullied—online and off. These leaked images are used to police women’s sexuality and punish them for exhibiting any sense of sexual liberation or freedom.

Whether they consented to the images being taken or released is, for many of the abusers, irrelevant. But of course, it is not only relevant—it’s key. Ashley Madison and Rentboy.com users were—regardless of your moral hangups—consenting adults engaged in non-coercive sexual acts. In the case of escorts on Rentboy.com, this literally changed the entire nature of their work. “Rentboy has made this a safer business to be in,” one anonymous escort told Gawker. “I don’t think targeting the least objectionable form of prostitution is going to reduce coerced prostitution,” he said.

If anything, these “scandals” only detract from more important issues when it comes to the distribution of sex on the Internet—as coerced and exploitative prostitution is a real issue. When former Subway spokesman Jared Fogle pled guilty to possessing child pornography and paying for sex with minors, the coverage of the crimes rightfully sparked outrage on social media. As reproductive rights activist Erin Matson pointed out, that’s because “underage sex” has a name: statutory rape. Unlike Fogel, Ashley Madison users committed no crime. Adultery is perfectly legal. In the case of Rentboy.com, there is no victim.

However, that doesn’t mean the wrong people aren’t getting the blame. When Jennifer Lawrence’s nude photos were stolen and released as part of “The Fappening,” many folks argued that the victims—most of whom were women—“had it coming” for daring to take or share intimate photos. Although he later rolled back on the statement, comedian Ricky Gervais tweeted, “Celebrities, make it harder for hackers to get nude pics of you from your computer by not putting nude pics of yourself on your computer.”

Whether they consented to the images being taken or released is, for many of the abusers, irrelevant. But of course, it is not only relevant—it’s key.

Gervais’ comments might have provoked outrage, but we continue to reinforce his ideas every day. Some are actually defending the marital turmoil the Ashley Madison hackers have wrought on adulterers. The Mirror’s Colleen Nolan argued that because their users engaged in “calculated” affairs, the “level of ­planning… makes users of Ashley Madison fair game for the hackers who have exposed their infidelity.” Acculturated’s Chelsea Samelson agrees: “Sorry folks, but signing up for a cheating website and expecting it to be somehow foolproof or invincible is nothing short of sheer folly.”

But if we’re looking for someone to point the finger at, all we have is ourselves. Twelve years later after Avenue Q debuted on Broadway, the Internet is still where many of us seek and consume sex, but unfortunately, it’s increasingly accompanied by a torrent of public shame and abuse. Society hasn’t come as far from Hester Prynne as we thought.