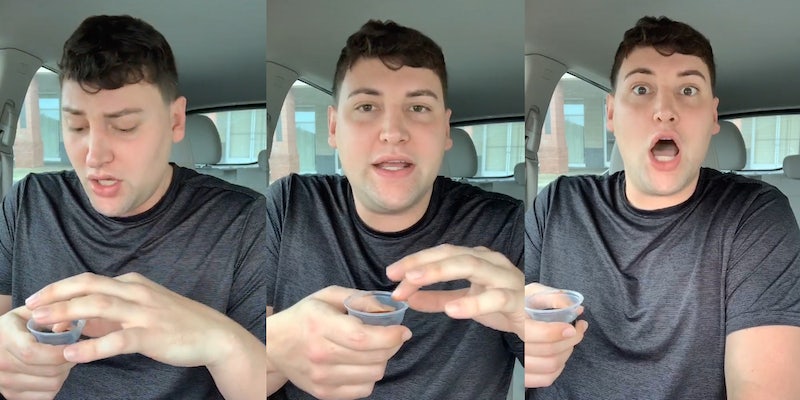 TikTok dudes are dipping their balls in soy sauce for ‘science’

No, your balls probably can't taste food. That hasn't stopped dudes from dipping.

Two decades after sketch group the State declared, “I wanna dip my balls in it,” it’s become a challenge on TikTok.

According to BuzzFeed, a 2013 Daily Mail article that claims “Testicles have taste buds” seems to be the origin; it was recirculated by user @cryinginthecar, who asked anyone with testicles to dip them in something to test out the science.

This young man dabbed his testicles with soy sauce, which is reportedly one of the flavors they can taste, and apparently had a sensation.

Guys tried to joke about it, but there were also some Kombucha girl-level taste journeys.

Not everyone tried soy sauce.

Elsewhere, the need to know was causing some tension in relationships.

Fortunately, a hot doctor on TikTok was willing to step up and clarify this claim. BuzzFeed reached out to Dr. Kirten Parekh, a podiatrist in New Jersey, who responded to the original video. He claims that “just because you have taste buds in that area doesn’t mean you can physically taste those flavors. Your body might receive it, but you won’t have a perceptive taste of sweet, sour, or whatever flavor.”

An article on MedicineNet, posted in response to the TikTok trend, claimed that while we do have taste receptors in the testes, brain, liver, bladder, and respiratory system, smell also plays an important role in what we taste: When you hold your nose while eating or drinking, the sense of taste is dulled. The article ends on a bigger question: “Do testicles sense smells?”

And now we await that TikTok challenge. But is it any weirder than people eating cereal out of each other’s mouths?