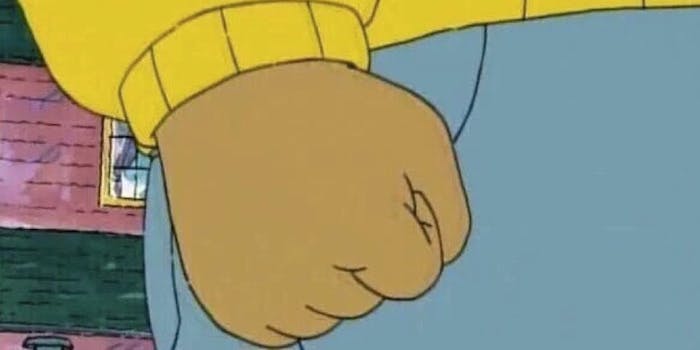 The fist is everywhere.

Hey! It’s a wonderful kind of day, where we can learn to work and play, and retweet a ton of memes from the ’90s PBS cartoon Arthur.

The beloved, morally upright aardvark from your childhood is all over your timeline today, and you may be wondering why. Why Arthur? Why now? Well, why not?

The Arthur resurgence started with @AlmostJT, who was taken by how many different affects one cartoon aardvark’s fist could convey.

The fist says everything.

"Can you pass me my charger?"

"What percent you on?" pic.twitter.com/Rlba9y4SdW

When you get on the train and hear “It’s Showtime!” pic.twitter.com/qeb28StCPb

when he's cute and tall but doesn't believe in astrology or aliens pic.twitter.com/xjN1Ueudnh

It can even be used to react to the proliferation of Arthur Fist memes.

When all you're gonna see on Twitter today is Arthur's fist pic.twitter.com/qsfbuX8CXe

Although today’s Arthur spree started with the fist, it’s now expanded to Arthur screencaps in general. In spite of Politics Time, everything is very good on Twitter right now because of Arthur. Bless him.

Arthur memes look like they’re definitely going to have some longevity. Like Spongebob Squarepants memes before them, they combine nostalgia with the flexibility to express basically anything you want. Complex is onto something when they suggest Arthur’s fist is the new Mr. Krabs.Enjoy it while it lasts, because we’ll be back to politics and shitposting soon enough.