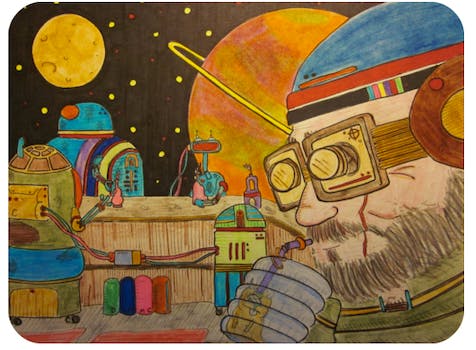 The Daily Doodles are so much more

Artist David Chandler writes and doodles. The stories and art will take you to a different world.

David Chandler gives himself exactly one hour each day to create a doodle, color it and write a small story with it. You can escape with him to his fantasy world on the Tumblr blog, The Daily Doodles.

The stories that accompany the doodles range from the lighthearted fantasy world of a young boy living underwater to one with a more personal tones. He also occasionally includes darker topics.

Chandler says he doesn’t know where his inspiration comes from. He keeps a notepad handy in case inspiration hits him and uses it as a database when he can’t think of something immediately.

The well-written stories that complement Chandler’s brilliant drawing and coloring talent. It’s all hand-drawn. It would be a disservice to yourself not to stare at his work as you travel with him through his doodling fantasies.

The Los Angeles-based artist connects with fans on his Tumblr, Facebook and Twitter. Chandler even offers readers to star in their own doodle for a small fee.

Chandler’s blog gets a Dot Score of 69 and ranks 75 in our Dot Leaderboard.

@jayrosen_nyu: I had a different take on that Politico piece, although I admit mine isn’t nearly as funny :-) paidcontent.org/2013/02/19/jus…