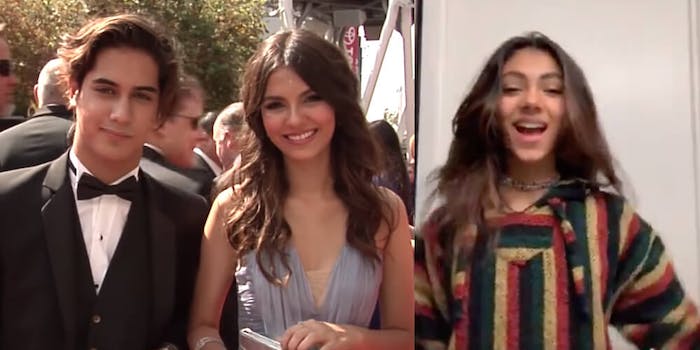 'Somebody gotta get Victoria and Avan on the phone, cause something ain’t adding up.'

The internet is always ready to die over a good celebrity lookalike, but when someone pops up who looks like the actual lovechild of two characters from the same show? Chills.

TikTok user @1m4p13ce0fsh1t, whose real name Ali, is basically a face meld of Victoria Justice and Avan Jogia, who both starred in the popular Nickelodeon show Victorious at the start of the decade–and whose characters were often shipped together. When Ali called attention to these unnerving similarities in one of her videos, it didn’t take long for everyone to collectively freak out.

Ali’s video starts out with popular audio that another TikTok user created in 2019 to mock movies.

“It all started when my mom met my dad and they fell in love and they had me,” the voiceover can be heard saying, while a photo of Justice and then Jogia appear on the screen–a popular TikTok meme format.

“Hi, I’m Ryan, and my life is kinda crazy,” the voiceover says as Ali appears on the screen.

After a Twitter user posted the TikTok on the platform, fans of the show expressed how shook they were.

“Nah somebody gotta get Victoria and avan on the phone, cause something ain’t adding up,” one Twitter user joked.

My eyes when i saw her pic.twitter.com/xQRLjqWhFy

How the hell did- pic.twitter.com/G3EF97TFKx

Digging into her TikTok account, fans were quick to discover that this not-Victoria Justice teen actually has a whole series of videos capitalizing on how similar she looks to the former Nickelodeon star. These often involve reenactments of scenes from Victorious, utilizing audio from the actual series and roping in other TikTokkers to play additional roles.

And to add an extra layer of wtf-ery, one of the girls who sometimes jumps in on the videos looks way too much like Ariana Grande, who played Cat in the original series.

Is the next evolution of TikTok just people who look like celebrities reenacting old shows? There are worse things that could happen to a popular social media platform!

It’s hard to say what celebrity lookalikes or creepy combos are lurking on TikTok waiting to reveal themselves and their uncanny resemblances to the world, but we’re certain this fake mini-cast of Victorious isn’t alone…