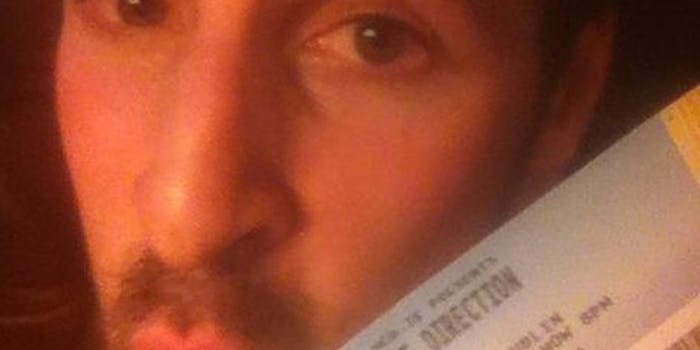 Steve O'Donnell had a brilliant idea to score some cheap pizza: use his art skills to forge a student ID. Then he had a dumb idea: brag about it on Facebook.

Irish designer Steve O’Donnell had a brilliant idea to score some cheap pizza: use his art skills to forge a student ID.

Then he had a not-so-brilliant idea: diss the pizza place, which refused to give a student discount to a non-student, by posting the fake ID on Facebook and writing, “Fuck you Apache.”

O’Donnell is what his Irish brethren might call a smart arse. But posting the image on Facebook, of course, was pretty stupid. 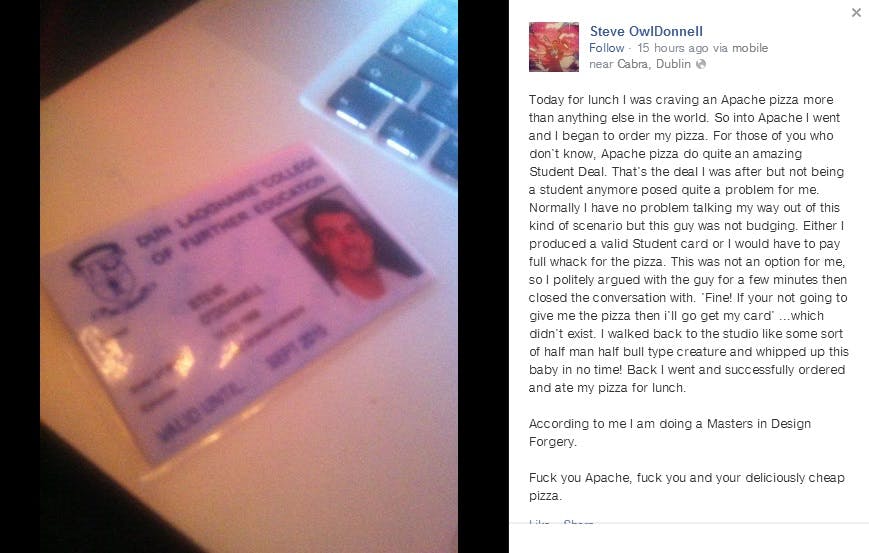 The chain was not pleased with O’Donnell’s efforts. It shared the image with its 2,630 Facebook fans, tagging the college O’Donnell used to make his ID appear authentic, O’Donnell’s employers, and the police.

Some redditors are skeptical, claiming O’Donnell didn’t actually post the photo to Apache’s page. Another pointed out the inconsistency in Apache sharing the photo, as it doesn’t completely fit in with its other posts, many of which are image macros.

Was it a marketing stunt? Involving the police seems a little over-the-top for that. And it seems unlikely the chain would use a phrase like “fuck Apache Pizza” if it were all a hoax.

As if the public shaming, possibility of losing his job, and potential legal trouble weren’t bad enough, Apache had a horrifying message for the self-professed “Masters in Design Forgery” student and One Direction fan:

“We would also like to point out that Apache Pizza does not deliver to prisons, although it is a location we are definitely considering.”

Wonder if Apache will consider discounts for inmates as well.