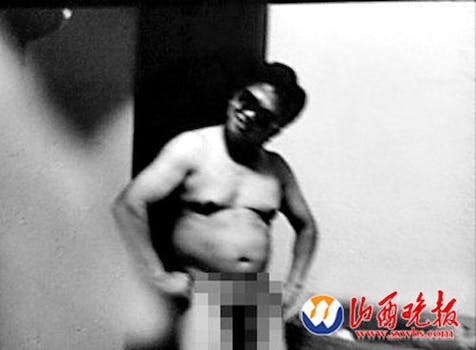 If Anthony Weiner still has nightmares about that time he ruined his promising career by tweeting a picture of his penis, he should take a trip to China.

If Anthony Weiner still has nightmares about that time he ruined his promising political career by accidentally tweeting a picture of his penis, he should take a trip to China.

Several politicians have similarly had their naked bodies spread all over social media in recent months. It’s like one Weiner every seven days over there. There are enough victims to form a support group.

The latest scandal involves Qu Wenyuan (pictured above), a village secretary in the 5 million–strong city of Nanchang, who posed for a photograph wearing nothing but sunglasses and a pair of sizeable love handles. Apparently pissed off at his gambling and corruption, Qu’s girlfriend posted the photograph to Sina Weibo, China’s biggest and most influential social network. The photo spread with Weiner-like velocity across China’s social Web.

Qu has since been suspended.

Another victim of China’s appetite for social media sex scandal is Lei Zhengfu, a party boss in the southern megacity of Chongqing. In November, photographs of Lei having sex with his 18-year-old mistress exploded across Sina Weibo. He, too, was kicked out of office—and was soon followed by 10 of his colleagues, who were caught in similarly uncompromising positions.

State media claimed the videos were made by “a criminal ring” of extortionists who specialized in filming politicians having sex and then threatening to spread the videos on social media.

Then there’s Qi Fang, a police chief in China’s Western Xinjiang province. Qi was accused of having an affair with two sisters, using public funds to take them on resort cruises, and promoting one of them to a powerful position in the local bureaucracy. Fang was sacked after pictures of his hotel-room encounters began spreading on Sina Weibo.

The lesson? If you want to get a corrupt Chinese politician fired, try to get him naked first.