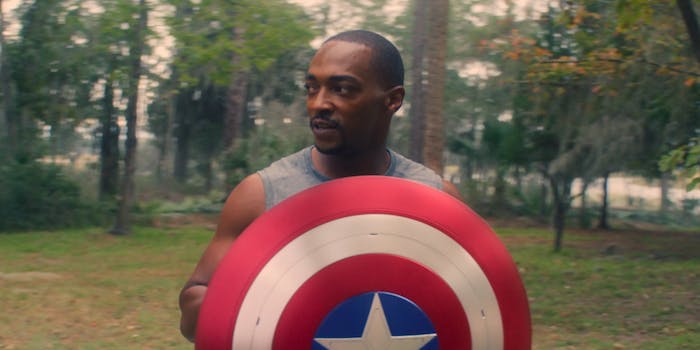 Mackie says 'something as pure and beautiful as homosexuality has been exploited' by fandom. Huh?

“The idea of two guys being friends and loving each other in 2021 is a problem because of the exploitation of homosexuality.” This is just one of several bizarrely-worded opinions Anthony Mackie shared in a new Variety interview, discussing the audience response to The Falcon and the Winter Soldier. Mackie seems uncomfortable with fans shipping Sam Wilson and Bucky Barnes, and tried to push back against the idea of a romantic Sam/Bucky subtext without sounding homophobic. Needless to say, his comments didn’t go down well with fans.

“It used to be guys can be friends, we can hang out, and it was cool,” said Mackie. “You would always meet your friends at the bar, you know. You can’t do that anymore, because something as pure and beautiful as homosexuality has been exploited by people who are trying to rationalize themselves.” This is a common refrain among people who criticize queer shipping fandom: The idea that fans are somehow tarnishing platonic male friendships by writing queer fanfic about them.

Despite Mackie’s assertion that “homosexuality” is “pure and beautiful” (a phrase that was widely mocked when Variety quoted him on Twitter), this attitude is pretty homophobic. After all, what’s wrong with fans seeing a romantic angle to Sam and Bucky’s relationship? Why does it warrant a public statement from Mackie, when fanfic and queer interpretations have zero impact on the canon of the show? Why does he see this as different (and seemingly worse) than his own repeated requests to have a love story with Black Widow?

If a popular franchise releases a TV show about two characters with a compelling relationship, then people are inevitably going to ship them. And since the MCU is primarily led by male characters who have intense relationships with other men, most of the popular ships are male/male pairings. QED. There’s also a long history of fans shipping buddy-cop partnerships like Holmes and Watson or Starsky and Hutch, and The Falcon and the Winter Soldier plays into that dynamic.

Mackie is clearly trying to debunk something that he perceives as a misreading of his character. He wants to defend the importance of depicting male friendships on film, arguing that friendship is somehow being “exploited” by… well, it’s not precisely clear what he means, but it’s not a message of support toward queer Marvel fans. At any rate, he evidently doesn’t understand the dynamics at play within fandom. He doesn’t understand that fans are shipping Sam and Bucky for their own entertainment, something that’s only partly related to MCU canon. He also fails to understand that by framing Sam/Bucky fandom as an attack on straight male friendship, he’s being pretty offensive.

The MCU already includes numerous positive depictions of same-sex friendships: Steve Rogers and Bucky Barnes, Carol Danvers and Maria Rambeau, Steve Rogers and Sam Wilson, Tony Stark and Rhodey. In fact, those friendships often have more narrative weight than straight romances. Meanwhile, there are zero queer characters in the franchise. Fans are writing those stories for themselves. It’s very telling that Mackie sees the mere existence of queer interpretations as a threat.