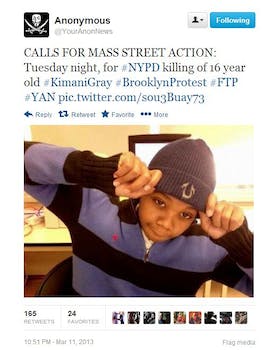 The hacktivists collective has also released a list of NYPD phone numbers some have called a hack increase public awareness about Kimani Gray, who was fatally shot by police Monday.

On Monday, 16-year-old Kimani Gray was shot and killed by plainclothes police in the Brooklyn neighborhood of East Flatbush. Now, the hacktivist collective Anonymous has joined in the call for “MASS STREET ACTION,” using the hashtag #BrooklynProtest.

Gray was allegedly drawing a loaded six-round,.38 caliber Rohm brand revolver from his waistband when the officers fired 11 shots at him, hitting him three times.

He was pronounced dead at a local hospital a short time later.

Gray’s sister, Mahnefah, told the New York Times a witness said he was only adjusting his belt when he was shot.

A subsequent vigil for Gray, attended by about 100 community members, turned violent last night, according to DNAinfo, when attendees reacted to the absence of city officials.

Some of the teens attending the gathering grew violent and “threw bottles at cops, broke shop windows and looted a Rite Aid… attacking the store manager, clerks and security guard.” The windows of some surrounding businesses and a city bus were also smashed. No arrests or injuries were reported.

City Councilman Jumaane Williams rushed to the site to try to calm people down. On Twitter he mourned the fact that the “youth in this community have no outlets for their anger, no community center.”

A new gathering is scheduled for 8pm tonight (other sources, including a Facebook page, say 7pm), Tuesday, at East 55th Street and Church Avenue in Brooklyn.

In the eight hours since Anonymous issued its call to arms, #Brooklyn Protest has been used 509 times, according to Twitter analytics tool Topsy. It was oriignally #BrooklynRiot but was changed.

Anonymous has also released a list of NYPD phone numbers some have called a hack. They are publicly available numbers, and citizens are being asked to flood the NYPD with complaints about the shooting.

The incident has drawn comparisons to the fatal shooting of Trayvon Martin in Florida last year. In that case, hacktivists, attempted to protest the state’s “stand your ground” law,by spreading “Zimmerman’s address” to the world via social media. However, they brought a truckload of grief to an elderly couple with no relationship to Zimmerman whatsoever, including death threats.