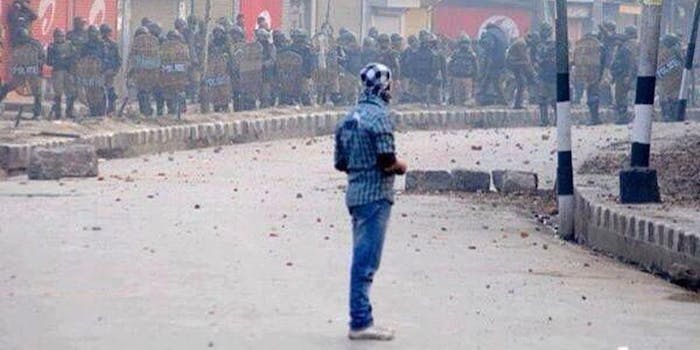 Anonymous tweetstorm puts the spotlight on violence in Kashmir

Anonymous took to Twitter in  #OpGabon to draw attention to a humanitarian and political issue in an area of the world that rarely sees coverage from media in the west. Now they’re doing it again, this time in #OccupiedKashmir.

Kashmir is an area in the northwest of India on the border with Pakistan and spilling over into China, and control over the region has been in dispute among the three nations essentially since the creation of the two states. In contrast to the officially Hindu India and Muslim Pakistan, Kashmir has a significant Sikh population as well as Hindus, Muslims and Buddhists, setting it culturally apart from its neighbors; it is somewhat analagous to Kurdistan in this way. I

The massacre and oppression of these people by the Indian government and the suppression of communication via Internet blackouts, publication bans, and curfews is the focus of #OpKashmir. This operation, as with many Anonymous media outreach projects recently, has no official hacking component, although some Anons have pointed out that BJP.org, the website for the Hindu Nationalist Bharatiya Janata Party, India’s second-largest political party, is down—and has been for so long that there is no Google cache of the site.

The Pastebin document announcing an #OpKashmir tweetstorm says its objective is, “To raise awareness in social media regarding the human rights violations occuring [sic] on the ground in Indian Occupied Kashmir and call for the global community to express their solidarity with the Kashmiri struggle for justice and freedom.”

The activists behind #OpGabon have thrown their resources behind #OpKashmir in solidarity, joining the tweetstorm with their multiple Twitter accounts, which already have the attention of media.

A previous version of #OpKashmir in February trended globally for more than a day, but this iteration used a different hashtag, #OccupiedKashmir, possibly diluting the focus. It began at 4pm London time, for maximum impact on European Twitter users just checking in before the weekend, guaranteeing that in some circles at least, it will be the main topic of cocktail chatter tonight. That will give it all weekend to percolate in the minds of those who see the tweets, and the ultimate hope is that by Monday the mainstream media will be interested enough to investigate the claims of slaughter and oppression.

We reached out to @OpKashmir_ on Twitter, and they told us the operation’s goal was to create awareness about one of the world’s oldest illegal military occupations,” “garner support for the struggle of Kashmiri people by citizens of the world on an international level,” and “puncture the claim of Indian state of being world’s largest democracy.”

The handle @OpKashmir, he told us, is not associated with the Anonymous operation, but a glance at the activity on the account shows it coincides with actions in OpKashmir, although focusing more on hacks and “Tangodowns” than on the tweetstorm, in which it did not participate.

How successful was the tweetstorm? Well, according to analytics site Topsy.com, it produced 7,793 meaningful (favorited or retweeted) tweets over the duration of the storm, which is significant. The #OccupiedKashmir hashtag trended globally, briefly at #1, and topped trending lists in India for some time.