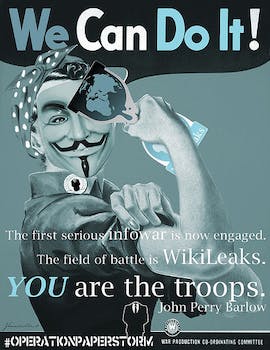 Google has given Anonymous its own video channel, with hundreds of hours of hacktivist announcements.

The loose-knit hacker movement has an officially sanctioned spot on YouTube, one of its preferred outlets for broadcasting warnings to targets of its hacks and other pronouncements.

The channel is called simply “Anonymous,” and notes that it’s “compiled by YouTube.”

Is this a nod of approval from the Google-owned site?

Not quite. The “Anonymous” channel, explained YouTube spokesperson Matt McLernon, is part of a new topics initiative YouTube has been rolling out since the beginning of this year.

“These are automatically created channels around topics—not by an editorial team,” wrote McLernon in an email.

You can distinguish the automatically generated topic channels from ones created by video bloggers by looking for “/topic/” in their URL, or Web address, and “compiled by YouTube” immediately below their title.

The Daily Dot found the Anonymous channel by browsing the site. It doesn’t come up in a regular search for “Anonymous.”

The description on the channel was taken from Wikipedia’s entry on Anonymous, so it’s clear this was a minimal effort on YouTube’s part. (Facebook similarly populates pages about popular topics; Wikipedia makes its content freely available for such uses.)

Minimal effort aside, the fact that there are enough Anonymous-related videos on YouTube and that they’re popular enough to get picked up by an algorithm is an acknowledgment of the collective’s influence.

The YouTube Anonymous channel currently has 57,025 videos, which amounts to hundreds of hours of viewing time. A quick check shows the channel has most major Anonymous videos, including French Anti-ACTA protestors and a Spanish Anon’s call to arms from last summer. Collectively, the Anonymous videos have been viewed 234 million times to date.

YouTube has other Anonymous and hacktivism-related channels, including  Operation Chanology, the first global operation by Anonymous in 2008; an AntiSec channel; and a LulzSec channel.