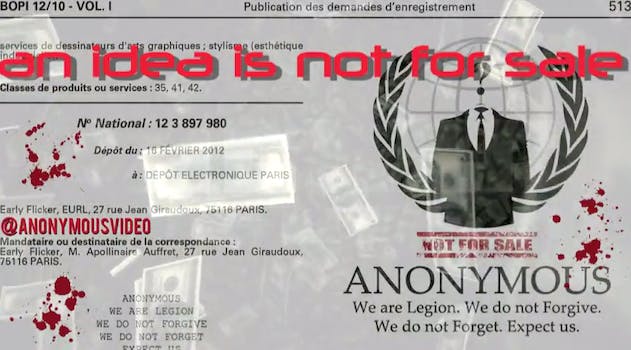 Early Flicker wants to manufacture officially licensed Anonymous gear. Hopefully, it doesn't need a website for that to happen.

A French company specializes in making T-shirts and other goods has filed a trademark claim over Anonymous’s unofficial logo and slogan. What could possibly go wrong?

Apollinaire Aufret submitted the request on behalf of Early Flicker to the Institut National De La Propriété (INPI) on Feb. 12. The company hopes to emblazon the image and phrase on various manufactured goods such as leather products, handbags, household items, clothing for adults and children, and walking sticks.

The trademark request went unnoticed until recently, when Twitter user @asher_wolf tipped it to Wired UK.

Now, Anonymous is firing back.

Earlier today, a message was posted on the site AnonNews in response to Early Flicker’s trademark, under the title #OpAnonTrademark.

“There [sic] arrogance and ignorance of what they have done will not go un punished [sic]. Anonymous will take down any business thay have going on the internet and the ninety nine percent will not stop until the registration has been revoked and a public apology has been made.”

Similarly, two videos, one in French and one in English, have been uploaded to YouTube threatening Aufret/

Surprisingly, Early Flicker’s page is still functional, though something tells us that won’t be the case much longer. It’s unclear how this situation will play out, but chances are Aufret will regret trying to capitalize off of Anonymous.