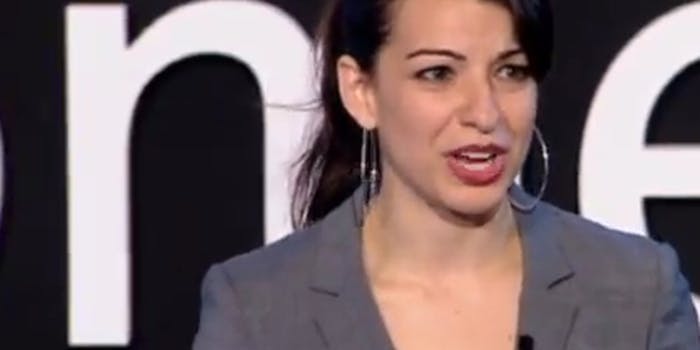 Sarkeesian, who runs the video blog Feminist Frequency, became a target of abuse—including rape and death threats—last May after launching a Kickstarter fundraising drive for a project promising to explore sexist gender tropes in video games.

“I love playing video games but I’m regularly disappointed in the limited and limiting ways women are represented,” Sarkeesian wrote. “This video project will explore, analyze and deconstruct some of the most common tropes and stereotypes of female characters in games.”

In response, Sarkeesian was hit with what she calls a “cyber mob” from angry male gamers. Hundreds of abusive tweets flooded her Twitter feed, threatening violence and sexual assault. Vandals attacked her Wikipedia page, plastering it with explicit sexual images, sexism and racism. And someone even created a video game where users were invited to “beat the bitch up” and punch a digital version of Sarkeesian’s face until it became battered and bloody and bruised.

Sarkeesian fought back, chronicling the harassment on her blog and speaking to dozens of news outlets. She’d originally set a humble fundraising goal of $6,000. But after the torrent of abuse received widespread media attention, donors flooded her page. Sarkeesian finished the Kickstarter campaign with nearly $160,000, or about 25 times what she’d asked for.

You can view Sarkeesian’s TEDxWomen speech below. Just don’t expect to read any insightful comments if you click through.