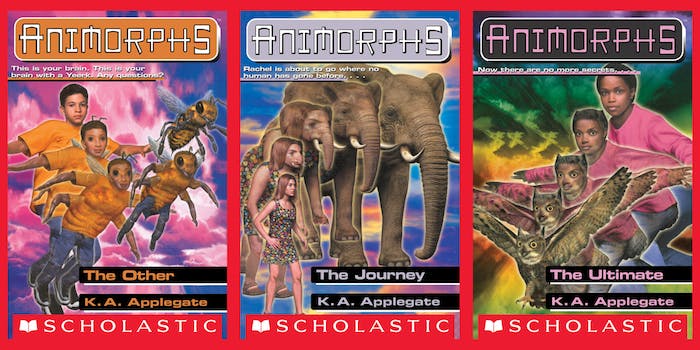 The long-awaited ‘Animorphs’ movie is in trouble

The original 'Animorphs' authors have quit the film over creative differences.

Millennial sci-fi fans were excited to hear news of an Animorphs movie this year, thankfully with the books’ author, K.A. Applegate, onboard. But it sounds like that dream is over. Applegate and her husband Michael Grant (who collaborated on the Animorphs books) have quit the project under unspecified but unpleasant-sounding circumstances.

Grant tweeted the news on Tuesday, saying, “With great sadness we have decided not to participate further in the @picturestart effort.” He added that he and Applegate might post a full explanation on Reddit later, “but for now let’s go with ‘creative differences.'” He also linked to a 2018 blog post by Percy Jackson author Rick Riordan, comparing his Hollywood experiences to their creative conflicts over the Scholastic/Picturestart adaptation of Animorphs. To anyone familiar with the Percy Jackson movies, that’s not a good sign.

Published about a decade after the Animorphs‘ heyday in the 1990s, the Percy Jackson novels played to a similar crowd: a tween-friendly fantasy series that earned a massive fandom, with adult fans looking back on the books with nostalgic affection. But the Hollywood adaptation changed numerous elements of the story, earning mixed reviews from critics and a negative response from many fans.

Years later, Rick Riordan came clean about the creative conflicts he faced with the film adaptations, saying that his feedback was completely ignored, including criticisms that would later be raised by audiences when the films came out. He even posted a pair of emails he sent to the film’s producers, stating that the script was “terrible” but “eminently fixable,” and predicting that “fans of the books will be angry and disappointed.” These emails appeared in the same blog post linked by Animorphs co-creator Michael Grant, which doesn’t bode well for how that film will handle its source material.

The 54-book Animorphs series was an epic sci-fi war story about a team of teenage heroes who gain the power to shapeshift into animals and use that power to fight an alien invasion. These books never earned the same critical attention as Harry Potter or His Dark Materials, but they were hugely popular in the late 1990s.

In recent years, the Animorphs books have earned more praise for their deceptively hard-hitting approach to a war story aimed at young readers. This makes them an obvious choice for a new, big-budget adaptation that does justice to the source material. But if the original writers have broken ties with the filmmakers, that’s not a good sign. K.A. Applegate has a very positive reputation among Animorphs fans, and it sadly wouldn’t be a surprise to see another Rick Riordan situation unfold in Hollywood.