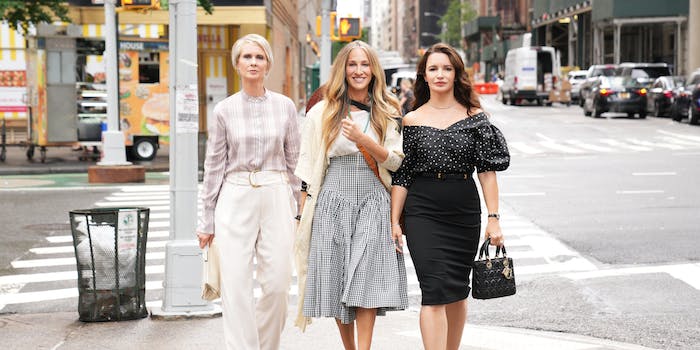 There is plenty of room for more people to join Carrie, Miranda, and Charlotte.

On Friday, HBO Max released the first photo of And Just Like That…, its 10-part Sex and the City revival and sequel that reunites Carrie Bradshaw (Sarah Jessica Parker), Miranda Hobbes (Cynthia Nixon), and Charlotte York (Kristin Davis), to mark the start of production. But in the days since, the photos have sparked plenty of memes of who’s missing and should join them with a ringing endorsement from one of the subjects.

The first look photo doesn’t tell us all that much about And Just Like That… apart from maybe how the characters’ looks have evolved since they last graced our screens in 2010’s Sex and the City 2. Carrie is all smiles in the middle with Miranda (now sporting a whiter bob) on one side and Charlotte on the other. They’re positioned on the streets of New York City with plenty of space (and a lack of passersby) around them.

But more importantly for the internet, the HBO Max photo is spacious enough that it’s essentially a catnip for anyone who can get their hands on Photoshop.

For instance, people are able to insert Samantha Jones (Kim Cattrall), the fourth original cast member of Sex and the City—and who isn’t appearing in And Just Like That…—that doubles as commentary on how they feel about it.

But Samantha was far from the only new companion that Carrie, Miranda, and Charlotte got with other contenders, including Sister Act’s Deloris, Barb and Star (no longer in Vista Del Mar), and the newest Gossip Girl.

There was even one edit that imagined the trio strutting through one of the subways that flooded in New York last week.

But one new And Just Like That… companion spread even further thanks to a viral image that inserted Andrew McCarthy carrying a mannequin from the 1987 film The Mannequin. One iteration created by H. Alan Scott went viral.

But on Sunday, Scott’s image got a second life after McCarthy himself posted the photo on Twitter. And even if And Just Like That… wasn’t asking, he’s answering.

We’re still a long way out from seeing And Just Like That…, but if the edits are any indication, the show has some big shoes to fill with Samantha’s absence and plenty of people or characters to choose from.