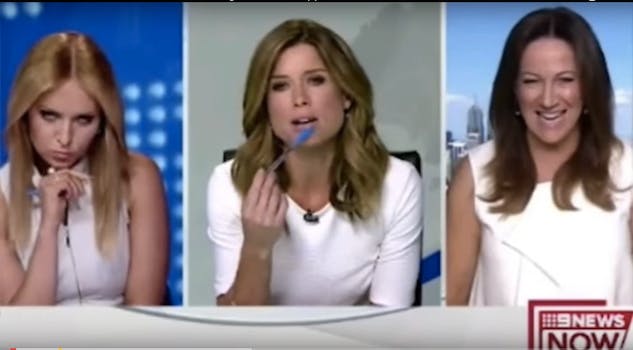 3 women wore the same thing to a news segment, and it got incredibly awkward

The movie 'Mean Girls' played out on the set of an Australian news broadcast.

An accidental #twinning situation led to a behind-the-scenes meltdown during an Australian news broadcast.

The situation played out on Nine News Now, when anchor Amber Sherlock realized her co-worker, Julie Snook, was wearing the same color shirt as her. Worsening the already harrowing situation, a guest on the upcoming segment was also clad in white.

In a “You can’t sit with us,” moment, Sherlock tore into her co-worker.

“I told you two hours ago,” Sherlock says to Snook, insisting she change her shirt or at least put on a jacket.

The exchange was caught on camera and put on the web.

When Snook tries to politely ask if it will be in issue, in a way where she hopes Sherlock will demur and say it is no big deal, she instead gets snapped at.

“Yea. It is an issue. Go and grab a jacket,” Sherlock retorts.

All the while the segment’s guest sits bewildered, trying to help but getting dismissed.

Snook continues to try and plead with Sherlock about her being unreasonable but to no avail.

“Come on, wearing a jacket—I asked you two-and-a-half hours ago. It’s not the hardest request,” Sherlock says.

Snook finally went and grabbed a jacket and the segment proceeded.