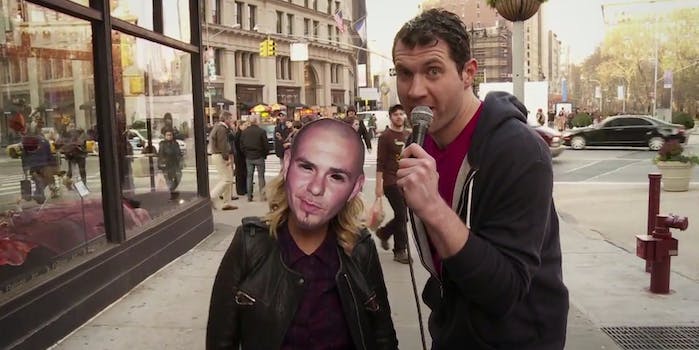 If you see someone running around New York in a mask, make that double take. You could be missing out on Amy Poehler.

If you see someone running around New York in a mask, make that double take. You could be missing out on Amy Poehler.

Comedian Billy Eichner is no stranger to recruiting celebrities to run up to random people on the street. This time, he had the Parks and Recreation star return to the show to play his strangest game yet.

The rules of “It’s not Pitbull—it’s Amy Poehler!” are rather simple. Poehler donned a mask with rapper Pitbull’s face on it. She ran around New York surprising people. People are a bit startled when the Pitbull mask goes in their face, but the reaction is even better once Poehler takes it off. No one really wants to meet Pitbull—they’re thrilled when it turns out to be Poehler.