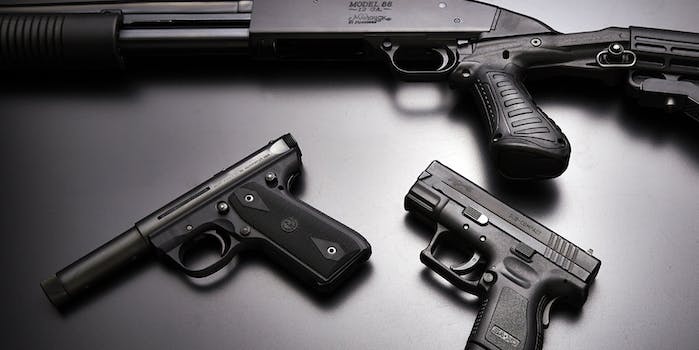 In the wake of last week's FSU school shootings, Americans were again reminded that our gun problem isn't over.

There were at least 12 school shootings since December 2012, from Newtown, Conn., to Marysville, Wash. Last week’s attack on Florida State University has made that number even larger. The American fear of guns is real and justifiable.

Although I’m best known as a former model, I’m writing about this issue as a Canadian living in the United States, and as a mother witnessing the influence of the Internet on gun culture. The fact that it’s 2014 and parents still have to worry about the kind of violence that we saw in Florida is ridiculous (the Canadian parliament shooting earlier this year, though terrible, wasn’t a school shooting). Perhaps because I wasn’t raised in America, I have a hard time understanding why more isn’t being done to prevent these acts. It’s sickening to even think about having to talk about these things in front of my child. I don’t want her to know about them, but if she continues to live in the United States, I know she’ll have no choice.

Even as the Internet hypes up Ebola as an American epidemic (as one accurate joke puts it, you are more likely to marry Rush Limbaugh than contract the disease in the United States—and would probably suffer more too), school shootings are a real epidemic in this country. Despite overwhelming support for laws requiring background checks on all gun buyers and preventing people with violent mental illness from buying guns, the gun control bill President Obama attempted to pass last year was thwarted by the National Rifle Association (NRA) and other pro-gun lobbies.

In many ways, this is a story of how influential lobbying groups can use the Internet to further entrench themselves into our power structure. After all, it was the massive online mobilizing conducted by the NRA in 2012 and 2013 that allowed the industry to avoid any major regulation after the Sandy Hook shooting. When New York City mayor Michael Bloomberg vowed to create a political counterweight to the gun lobby, he naturally sank his money into an aggressive social media campaign to create solidarity and instill a sense of purpose in pro-gun control groups, attempting to wrest control of the Internet back from gun groups.

Even when it wasn’t the organizations at the top using cyberspace to promote firearms, the cause is still popular at the grassroots level, with bloggers disseminating conspiracy theories about the gun control movement to providing a one-sided account of the Second Amendment.

The media also play a large role in exacerbating the problem of gun violence—and I’m not just talking about the usual culprits, like violent movies and video games. As the contrast between the CBC’s coverage of the Ottawa shooting and the reporting of major American networks on the regular mass shootings that occur here makes clear, there is a notoriety associated with real-life violence in the U.S. that is deeply troubling. A school shooter in America is guaranteed not only 24/7 news coverage, but weeks of subsequent psychoanalysis. As Psychology Today explains, the groundbreaking work of sociologist David Phillips in 1974 showed that “highly publicized stories of deviant and dangerous behavior influences copycat incidents.”

Although Phillips focused specifically on suicides, the same trend is clear with mass murder events like school shootings. In the words of renowned forensic psychiatrist Dr. Park Dietz, “We’ve had 20 years of mass murders throughout which I have repeatedly told CNN and our other media, if you don’t want to propagate more mass murders, don’t start the story with sirens blaring. Don’t have photographs of the killer. Don’t make this 24/7 coverage. Do everything you can not to make the body count the lead story, not to make the killer some kind of anti-hero.”

A plethora of other scholarly studies on school shootings reinforce this point—by turning school shooters into cultural icons, the media inadvertently creates an appealing archetype attractive to those desperate enough to pursue homicidal methods to gain attention.

While the media, which saturates youth culture thanks to the ubiquity of the Web, provides reinforcement by offering potential school shooters an appealing narrative context for their personal struggles, the Internet can actually offer support from like-minded people. In 2013, Frank J. Robertz wrote in his essay “On the Relevance of Phantasy for the Genesis of School Shootings” that “print media and Internet searches provide easy sources for susceptible adolescents to find out how to carry out a school shooting in order to get into the international headlines, how to inspire fan pages on the Internet, etc.”

Martha J. Markward, Stephanne Cline, and Nathan J. Markward concluded twelve years earlier that “the Internet probably provided several school shooters who have felt victimized over time with the support they needed to murder those they perceived to be their perpetrators.” Indeed, as investigators learned more about the motives for the Elliot Rodger shooting at UC Santa Barbara, they discovered that the culture of online misogyny bred in Men’s Rights Activists forums played a large role.

There are other cultural factors which need to be confronted if we are to effectively face this issue. There is the popular misconception that buying guns will somehow make you more likely to protect yourself or others in the event of a crime (which is questionable at best), for example. Others argue that guns will help you overthrow the government in the event of tyranny—a notion that, despite leading to a proliferation in right-wing militias during Obama’s presidency, is absurd when you consider that the state has nuclear weapons, drones, and countless other weapons that would make every legal firearm seem like a peashooter by comparison.

America is different from Canada for a lot of reasons. It has a lot of wonderful things going for it, but its gun issue needs to be addressed. The point here isn’t that government should be automatically trusted, but that a disproportionately high rate of firearm-related homicides indicates a very serious problem of its own. I love this country and wish to stay here, but whenever I see these stories in Newtown or Florida, it makes me afraid for the nation I now call my home. This is a tragedy, both because I love America and I hate to see the parents and children of my countrymen suffer so needlessly.

While raising children in Canada, you worry about your kids’ socks getting wet walking to school in the snow or not getting good grades on their report cards. Bullying still occurs, the economy isn’t always great (its six-year low in unemployment is still nearly seven percent), and there are plenty of childhood and teenage hardships that one experiences regardless of nation or culture. Then again, you know your child is going to get a good education regardless of their gender, receive easily-accessible and quality health care, and that his or her peers aren’t likely to have such easy access to firearms that they’ll be able to go around popping off people for no reason.

Wouldn’t it be great to live in a country where, instead of being terrified of the next school shooter, we could go back to worrying about our children’s wet socks and bad grades?

This article was co-written with Matthew Rozsa.