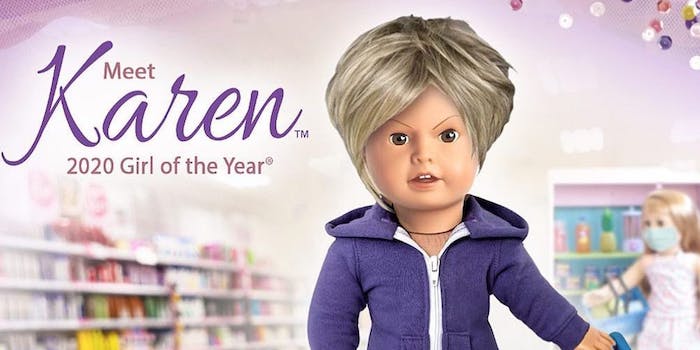 The meme shows a 'Karen' doll with a short blonde haircut and a purple tracksuit.

Last month, Adam Padilla, better known as Adam the Creator, riled up the Karen population of the internet when he made an image of an American Girl “Karen” doll. While most people seemed to find the meme pretty funny, the social media team for American Girl didn’t agree, threatening to take action to have the “copyright violating” image removed. Although they’ve since reversed their stance, tweeting that they have “no intention of censoring this parody meme” and anything tweeted to the contrary was a mistake, the damage has already been done.

Padilla’s take on what a Karen American Girl Doll would look like involves a velour tracksuit, the classic “speak to the manager” hair cut, a handgun, and a teeny tiny Walmart shopping cart. Set against a grocery aisle backdrop and other dolls wearing masks, the image features the tagline “She’s an independent thinker who refuses to wear a mask in public places!”

In other words, it’s a classic Karen joke, and the only people likely to be offended by it are Karens themselves. Fans of American Girl dolls were disappointed that the brand had decided to take action against Padilla’s meme when there are so many other, more serious issues going on right now, with Twitter user @ssbe83 stating that its choice to focus on a meme had changed her mind about buying an American Girl doll for her niece.

Others wanted to emphasize the company’s apparent poor understanding of parody and fair use, both of which the meme falls under and which are protected by law.

After seeing American Girl’s response to the meme, people began widely sharing it just to spite the company, setting off the Streisand effect—where objecting to something is what ends up making it famous.

The Daily Dot reached out to American Girl for comment, including a request for clarification on their original objection to the image. “American Girl has no intention of censoring this parody and anything shared to the contrary was in error,” a spokesperson said, reiterating its final tweet on the matter.