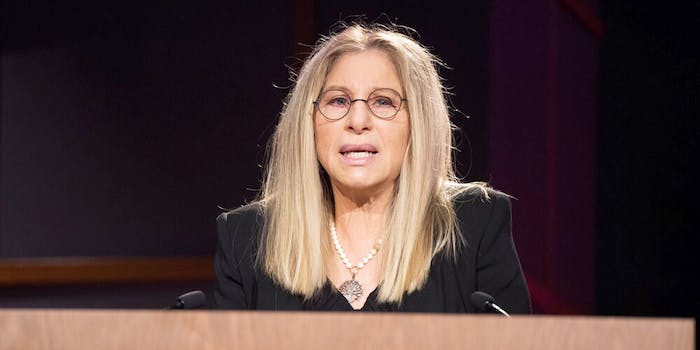 What does ‘Streisand Effect’ mean—and why are people talking about it again?

The Streisand Effect giveth and it taketh away.

Due to recent events, the time has come once again to talk about the meaning of the “Streisand Effect,” as in, the phenomenon of attempting to suppress an issue only to inadvertently draw attention to it. In this instance, it couldn’t have happened to a more worthy subject: New York Times conservative columnist Bret Stephens.

On Monday, George Washington University associate professor Dave Karpf tweeted out a fairly innocuous joke at the expense of Stephens. “The bedbugs are a metaphor,” he quote-tweeted a story about the invasive insects having been spotted in the Times newsroom. “The bedbugs are Bret Stephens.”

As far as burns go, it’s fine—not particularly revolutionary or clever, but it gets the job done. The tweet got a handful of likes and likely would have otherwise disappeared into the Twitter ether.

That is, until fast forward to a few hours later when Karpf received an irate email from Stephens—whom he had not tagged in the tweet, by the way—which also looped in his university provost.

“This afternoon, I tweeted a brief joke about a well-known NYT op-Ed columnist,” Karpf wrote in a follow-up tweet. “He is deeply offended that I called him a metaphorical bedbug.” After his subsequent tweet went viral, he bowed into the pressure with a screenshot of the email.

Again, it’s worth repeating that virtually no one had paid much attention to Karpf’s initial tweet, however after the subsequent tweets and screenshot went viral, Stephens suddenly found himself at the center of a maelstrom, as well as the subject of countless bedbug jokes and memes.

All of this, which brings us to the “Streisand Effect.”

Where did the Streisand Effect originate?

Back in 2003, acclaimed actress and singer Barbra Streisand sued photographer Kenneth Adelman for taking an aerial photograph of her Malibu, California home. On paper that seems like a pretty standard celebrity lawsuit, except when you consider … Adelman was not a paparazzi.

Rather, Adelman had been working on a project to illustrate coastal erosion along the California coastline, and the photo featuring Streisand’s home was one of approximately 12,000 taken. In fact, by the time Streisand brought the lawsuit against Adelman, at the photo had only been downloaded a total of six times. And her own lawyers had been responsible for two of those downloads.

However, as news of Streisand’s legal woes began getting media coverage, the photo of her home was picked up and printed by various outlets, and subsequently viewed literally millions of times. To add insult to injury, the case was later dismissed by a judge and Streisand was ordered to reimburse Adelman $177,000 in legal fees.

But it wasn’t until two years later that the phenomenon officially became known as the Streisand Effect. In 2005, Techdirt writer Mike Masnick was commenting on a bizarre story in which the Marco Beach Ocean Resort threatened legal action against a now-defunct humor website called “Urinal.net” over a photo of one of its urinals that displayed the resort’s name.

“How long is it going to take before lawyers realize that the simple act of trying to repress something they don’t like online is likely to make it so that something that most people would never, ever see (like a photo of a urinal in some random beach resort) is now seen by many more people?” wrote Masnick at the time. “Let’s call it the Streisand Effect.”

The Streisand Effect and Bret Stephens

Getting back to the subject at hand. The irony of the Streisand Effect in this instance was made all the more succinct by the fact that Stephens himself—a self-avowed proponent of free speech—has publicly spoken out against liberals attempting to “shut down the speech of others, ruin their reputations, and publicly humiliate them.”

And yet, with all things considered, the columnist incredibly managed to make things so much worse on Tuesday morning by attempting to defend himself in an MSNBC appearance.

In his remarks, which were captured by Vox journalist Aaron Rupar, Stephens claimed that he had not intended to get Karpf in any kind of trouble by looping in his superior, but that it’s allegedly “protocol everywhere” that managers know how “their people, their professors, or journalists, interact with the rest of the world.”

On MSNBC, Bret Stephens characterizes Dr Dave Karpf referring to him as a metaphorical "bedbug" on Twitter as akin to language used by "totalitarian regimes," adds that he had "no intention whatsoever to get him in any kind of professional trouble" when he tattled to Karpf's boss pic.twitter.com/iNJAvzPnMt

As if that somehow was not bad enough, Stephens added that being analogized to insects “goes back to a lot of totalitarian regimes in the past.” (You can tell how well that remark went over going by the expression of the woman sitting just to his left.)

Eventually, it would appear that Stephens fully succumbed to the Streisand Effect when he opted to delete his Twitter later on Tuesday. Although in typical Streisand mode, he acted like the whole thing was his idea.

“Time to do what I long ago promised to do,” he wrote, shortly before pulling the trigger. “Twitter is a sewer. It brings out the worst in humanity. I sincerely apologize for any part I’ve played in making it worse, and to anyone I’ve ever hurt. Thanks to all of my followers, but I’m deactivating this account.”