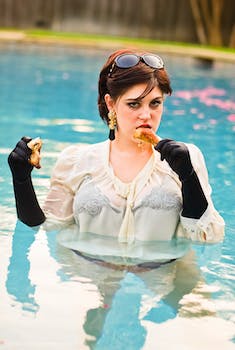 It looked like American Apparel was finally catering to overweight customers. They released some of their popular items in size XL and set up an online contest, The Next Big Thing, where plus-sized women can compete to become the retailer’s first plus-sized model.

However, customers remembered the retailer’s statement last year of plus-sized individuals: “That’s not our demographic.”

They certainly weren’t fooling Nancy Upton. The size 12 blogger said she found the contest, which asks curvy girls to post “booty-ful” photos of themselves, offensive.

“I thought, ‘Wow, they really have zero respect for plus-sized women,” she told Jezebel today. “They’re going to line them up like cattle and make puns about them until they’re blue in the face.’”

That’s when Upton decided to enter the contest herself. The 24-year-old enlisted a photographer to shoot glamour shots of her smothered with food. After entering the contest, she also put the photos on her new Tumblr, Extra Wiggle Room, where they have netted thousands of reblogs.

“It just occurred to me that based on their “Hey, come on, fatties, we want you to play, too” tone, wouldn’t it be kind of brilliant to respond in a, “Thanks for letting me play, just let me try put down the pizza, first” similar mocking tone,” she told Jezebel.

Now Upton, who does not actually want to model for American Apparel, is currently poised to win the entire contest. You can still vote for her entry for the rest of the day.

Upton’s statement has inspired debate on dozens of blogs and Reddit. Whether she wins or simply comes close, American Apparel will have to address her soon.