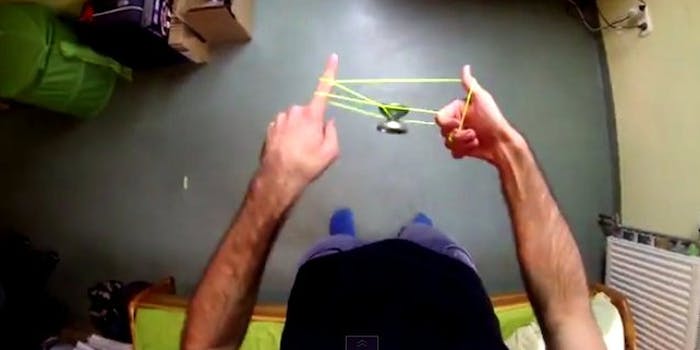 The laws of physics clearly don't apply to this dude.

It’s a known truth that at least 93 percent of the world’s population suck at the yo-yo. Surely you were that kid once: You sent the thing plummeting down the string and expected it to come bouncing back to your hand as if propelled by some heretofore unknown physical force—only to see it lurch pitifully upward once, and then hang there flaccid beneath your outstretched hand like a dead thing on a leash. Heartbreaking.

Karancz, who’s both the yo-yo world champion and an enthusiast of landscape architecture, recently strapped a camera to his head before commencing one of his extraordinary freestyle sessions. Somebody smart could probably attempt to explain the physical laws directing all this wacky yo-yo behavior. But, I mean, just watch the video. Physics clearly don’t apply to this dude.