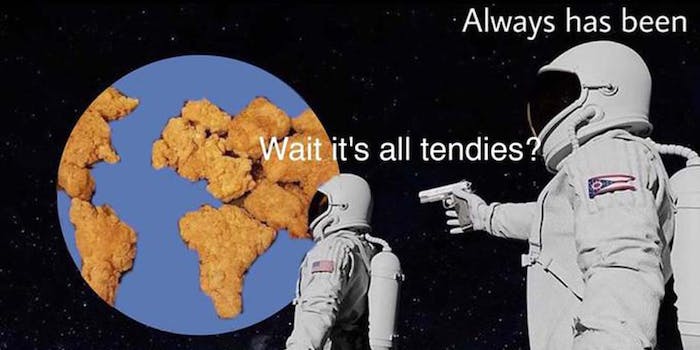 Picture this: two astronauts land on the moon. As they exit their craft, the first astronaut turns to look at the earth and gasps. “Wait, it’s all … ” Before he can finish, he’s interrupted. “Always has been,” says the second astronaut, slowly drawing his gun.

The scenario is not an unfamiliar trope, in which an innocent stooge inadvertently stumbles upon a vast conspiracy, only to be quickly silenced by a newly revealed conspirator. The “astronauts on the moon” adaptation, however, is so absurd that it could only have derived as a meme on the internet.

The history of the meme

The earliest known iterations of the “always has been” meme originally popped up on a 4chan board around August of 2018, according to Know Your Meme, and involved crude MC-Paint style drawings. One version, which surged in popularity around late 2019, was a spin on Ohio memes.

The meme got an update later in 2020, when a version using more “realistic” looking astronauts, now presumably standing on the moon, began surfacing on Reddit. In the following example, the earth was revealed not to be comprised of landmasses, but uh, chicken “tendies.”

In other examples of the “always has been” meme—also called the “astronaut meme” or “spaceman meme”—the planet was revealed to have been anything from Aspirin and mom’s sewing kit to Mountain Dew’s Baha Blast or even ASCII.

‘Always has been’ memes

As the meme grew and evolved, as memes tend to do, others got creative with it. Some came up with original artwork, while others expanded upon the meme, or even cross-pollinated it with other memes—such as the ridiculously popular cake meme.

Of course, it’s cake. It’s all cake. The astronauts are probably cake too. Gun, as well. If the “always has been” meme has taught us anything, that’s the real conspiracy that’s soon to be uncovered.