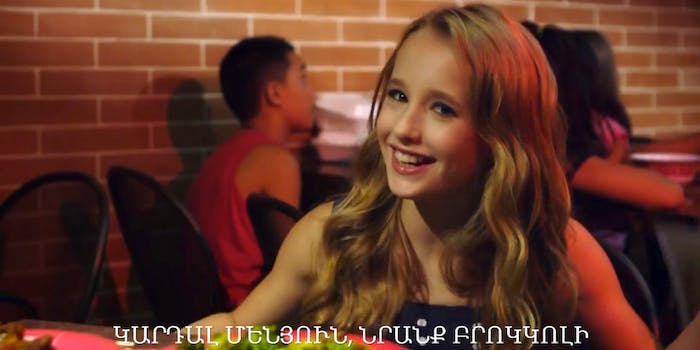 From the people who ruined Fridays and Thanksgiving, here’s ‘Chinese Food’

We'll give Patrice Wilson this: He sticks to what he knows.

Music mastermind (or master troll) Patrice Wilson, the man responsible for Rebecca Black’s “Friday,” may have another viral hit on his hands for all the wrong reasons.

He’s back again, and sticking to what he knows: recruiting young teenage girls to sing about common concepts. What Rebecca Black did for days of the week and Nicole Westbrook inflicted on one particular holiday, Alison Gold is now doing for Chinese food.

And it’s just as awful as you would think.

The song is full of stereotypes—it’s not as bad as Day Above Ground’s “Asian Girlz,” but that’s not saying much—and at one point Gold dances in a kimono with a couple of her friends dressed as geishas. She spends half the chorus naming different types of Chinese food that she loves while the song’s lyrics are displayed in different languages at the bottom of the screen (in a nod to Westbrook’s “Thanksgiving” video).

And then once Gold gets her fortune cookie, things get even weirder. If you thought Patrice Wilson dressed up as a turkey was the creepiest thing ever, that’s just because you hadn’t seen him hanging out in a bedroom with a bunch of teenage girls.

“Chinese Food” might even make you reminisce about a simpler time, when all we had to worry about was looking forward to the weekend or being grateful, not hateful.