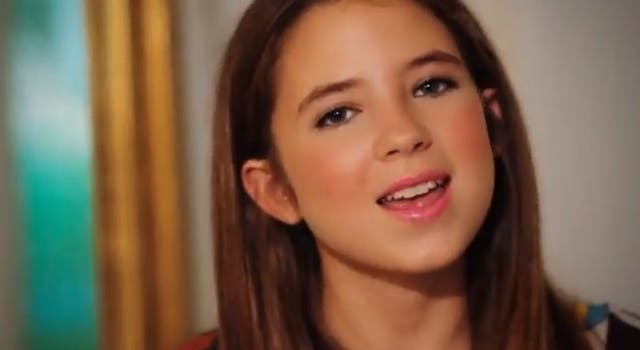 From the music factory that gave us “Friday,” “It’s Thanksgiving”

Nicole Westbrook's "It's Thanksgiving," is so much like Rebecca Black's "Friday," that they even have the same producer.

Do we have the next Rebecca Black on our hands?

Nicole Westbrook does for holidays what Black did for the days of the week with her new song “It’s Thanksgiving,” released on Thursday.

At first glance, the comparisons jump out. Both videos are of two young girls who sing about a common concept, their voices are autotuned past the point of practicality, and both songs were produced by Patrice Wilson of Ark Music Factory, the man behind a number of generic teen songs.

Here, Westbrook is beyond excited for her favorite day of the year as she sings her love for turkey and mashed potatoes, preps dinner for her and her friends, decorates her house with a “Be Thankful” sign, and uses a turkey leg as a microphone.

If you weren’t sure about the months in which major holidays occur, you will be now.

“December was Christmas, January was New Year, April was Easter and the fourth of July,” Westbrook sings, while forgetting some of the other holidays (mainly Halloween).

The video even features Wilson as the only adult around, as he barbecues and arrives to Westbrook’s Thanksgiving dinner dressed as a giant chicken (which comes off more creepy than funny).

“It’s Thanksgiving” currently has 33,596 views and 2,325 dislikes on YouTube, with an instant polarizing effect among the commenters. Many find it hilarious while some others can’t stand the song.

Reddit instantly jumped on the memes, and many focused on Wilson’s presence in the video. So far it’s more about Wilson showing up to a party full of kids than about Westbrook herself, although she stars in a few meme images as well.

Even if “It’s Thanksgiving” turns into the next “Friday,” Westbrook already has a response readily available in her new song.

“Can’t be hateful, gotta be grateful.”