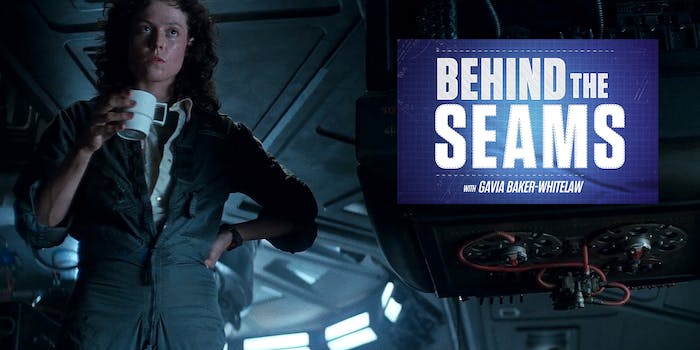 Space truckers: Inside the blue-collar costume design of ‘Alien’

'Alien' is praised for its production design and creature effects, but its costumes deserve attention too!

Ridley Scott’s Alien is famous for its evocative visual design. Filmed soon after the first Star Wars movie, it tapped into a new desire for gritty, authentic science fiction. Alien’s spaceship setting looks dirty and industrial instead of sleek and futuristic, and the titular alien is famously disturbing, designed by artist H.R. Geiger. Compared to the film’s iconic production design, the costumes rarely get much attention. But they’re just as important, as we explain in this week’s video from Behind the Seams.

Designed by John Mollo (who was also the lead costume designer for Star Wars), Alien‘s costumes play into its working-class setting. The main characters are the sci-fi equivalent of truckers or cargo ship workers. Employed by the Weyland-Yutani corporation, they mostly wear simple, practical uniforms. But each character personalizes their own outfit, telling us a lot about their tastes and attitude toward their job. The film is packed with symbolic visual choices that you may not notice at first glance.

Released over 40 years ago, Alien has aged incredibly well. It also arrived during a groundbreaking time for Hollywood sci-fi movies, as we explain in this video. Several members of the creative team worked on Star Wars or Alejandro Jodorowsky’s Dune (a film that was never actually made, but still earned a cult following), and their work was massively influential on later sci-fi media.

Each week on Behind the Seams, we dig into the costume design of a different movie or cinematic trope. Recent topics included a deep dive into the history of the Batsuit (with some surprising twists and turns!), and an exploration of Guillermo del Toro’s Pacific Rim. Click here to subscribe!