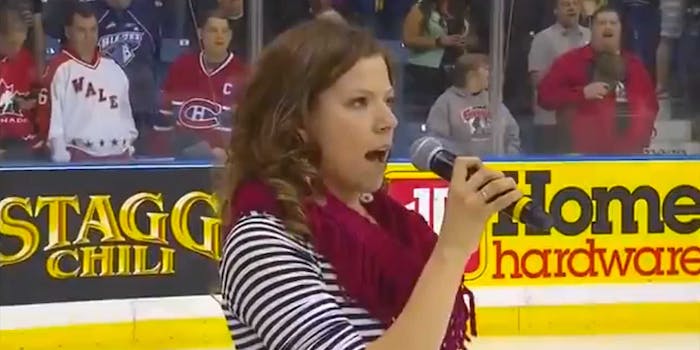 This sets a new standard for awful National Anthem performances

Alexis Normand was confident that she knew the lyrics before she started singing "The Star-Spangled Banner."

If you forget the lyrics to an iconic song, chances are the audience will be able to help you out. This is as true for karaoke as it is for “The Star-Spangled Banner.”

Canadian singer Alexis Normand was asked to perform both the Canadian and American anthems at a Junior ice hockey tournament in Saskatoon, Saskatchewan, on Saturday. She performed the Canadian national anthem, “O Canada,” just fine.

“The Star-Spangled Banner,” on the other hand, was a different story.

Normand was asked to perform the American national anthem that morning and was confident that she knew the lyrics before she started singing.

It’s not to the scale of Roseanne Barr’s rendition of the song in 1990 (for one thing, Normand can sing), but the audience looks uncomfortable as the camera pans to them.

After flubbing the lyrics, the audience eventually starts singing along, and while some of them don’t know the lyrics, they managed to get through the last couple of stanzas.

I’m embarrassed and deeply sorry. I wish I’d had more time to learn the American anthem. Thanks so much for the crowd’s help! #memorialcup