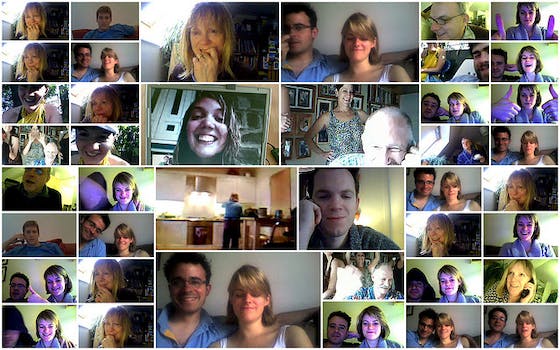 Save Skype, save the world

Why it's so important to protect apps like Skype and WhatsApp from governmental bans.

Text and voice messaging apps like Skype are adored by netizens. This is particularly true in emerging countries where apps like WhatsApp and Mxit offer a means to chat while paying only a fraction of what a text message or voice call would normally cost. These types of messaging tools are game-changers. But they are now facing new threats from government interference.

The Saudi Arabian telecommunication authorities have warned that encrypted messaging applications like Skype and WhatsApp could soon be blocked by the Gulf State, unless the government is given a backdoor to listen in on user’s conversations. According to reports, Saudi Arabia has given no justification for the possible ban—not that they need to. The Middle Eastern country has a history of banning messaging applications. In 2010, Saudi Arabia banned Blackberry phones from sending text, email, and instant messaging because, as with the current generation of messaging applications, communications through them are encrypted. Back then, government authorities argued that the ban was due to the need to fight terrorism.

A different and more conspiratorial theory reported by the BBC is that the potential ban has been encouraged by local telecom companies because users choose to use them over the traditional, and more expensive, SMS and phone calls. Transmitting an SMS message is essentially free for the mobile operator, requiring only a tiny bit of data, yet they charge users up to a few cents per message. The end result is that SMS becomes a goldmine for telecoms. It would therefore be no small wonder if these companies did not object to, or even actively promote, government action towards banning these messaging applications.

Given what happened with Blackberry and the fact that Saudi telecoms are unlikely to oppose such a ban, things are not looking good for Skype and WhatsApp in the country—or, even more importantly, for the rest of us.

So why should you care what applications are banned in Saudi Arabia (assuming you are not from Saudi Arabia)? Because these national battles of over the privacy of user’s communications have global consequences. 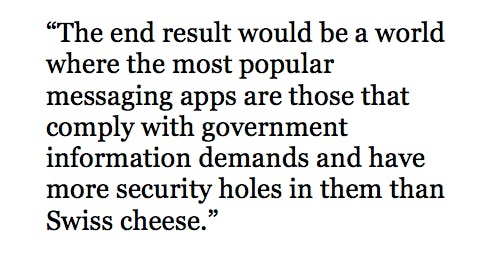 Governments learn from each other about which policy strategies are likely to work and be accepted. If the ban against messaging apps like Skype in Saudi Arabia remains uncontested, other governments looking to maintain a firm grip on the private lives of their citizen could see similar bans as an appealing policy to implement.

Not every country needs to ban encrypted messaging apps for it to have an interactional impact. If Saudi Arabia’s ban was introduced by a handful other authoritarian and semi-authoritarian governments, messaging apps may be forced to comply with government demands to install a backdoor, or else lose market share to competitors willing to sacrifice user privacy on the government alter.

The end result would not be a global ban on Skype or WhatsApp. It would be a world where the most popular messaging apps are those that comply with government information demands and have more security holes in them than Swiss cheese.

Netizens need to fight to protect the security of messaging applications from government interference, whether Saudi Arabian or American. Tools like like Skype and WhatsApp are becoming a primary way to communicate with our friends and our family—and a means to undermine telecom monopolies at the same time. If we meekly watch as messaging applications are strong-armed into providing back doors, we will wake up one morning in a world where none of those calls or texts can be done without a virtual government minder sitting in and listening.