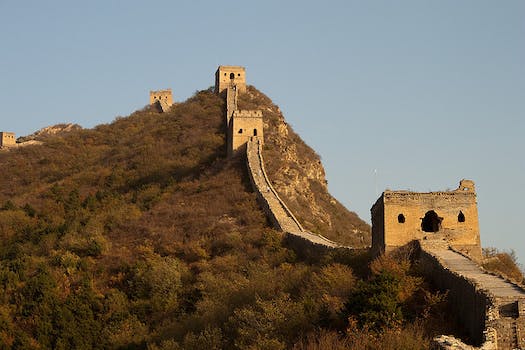 Building the Great Firewall of China

The Chinese goverment is selling off information to other governments on how to build a Great Firewall like theirs. Here's why that's concerning for all of us.

Traveling in China and want to share some great photos on Facebook? Maybe learn about Hong Kong’s history with Wikipedia? Well, too bad. Those and hundreds of other pages are blocked by the Chinese government through the so-called “Great Firewall,” as visible and impressive in cyberspace as the Great Wall is from outer space. The Great Firewall was established by the Chinese government in order to exert tremendous control over what Internet users inside their borders can see and say online.

This has been true for years. Now China is increasingly doing something even more dangerous with its brand of Internet censorship: exporting it.

The Great Firewall is more than just a web traffic filter. It is an entire infrastructure of regulations, censorship, surveillance, and personnel dedicated to restricting, monitoring, and arresting the sources of dissident found online. The Chinese government has reportedly even gone as far as hiring teams to spread government propaganda online. To give you a sense of its scale, by one account China’s “Internet police force” (who digitally man the Great Firewall) numbers over 30,000.

The establishment of the Great Firewall in China has led to a cat and mouse game between activists determined to circumvent the restrictions, and government security officers determined to stop them. This is particularly true for the Tor Project, a non-profit organization that operates a platform to help users browse anonymously and circumvent government censorship. They do this by relaying traffic through a network of volunteers who have offered up their Internet connection for the greater good. The Tor Project and the Chinese government have duked it out online for years, the latter blocking Tor relays when it discovers them and the former perpetually finding new relays to stay one step ahead.

The Great Firewall is bad enough for Chinese citizens, who operate online with the knowledge that the posting the wrong thing or even reading the wrong thing can lead to an arrest. However, China has started to recognize that what they have built in the Great Firewall is actually a marketable product. The government has been quietly turning its expertise in Internet censorship and repression into a product to be sold to foreign governments who are looking to construct their own Great Firewalls.

One of the most reported such cases, of China exporting its censorship expertise, occurred in Ethiopia. There, the China government helped the country block select news websites that were deemed critical of the Ethiopian government. Now the Zambian government is also turning to China for similar help. Chinese and Zambian officials are have reportedly been traveling between the two countries in an attempt to set up a deep packet inspection monitoring and control system. 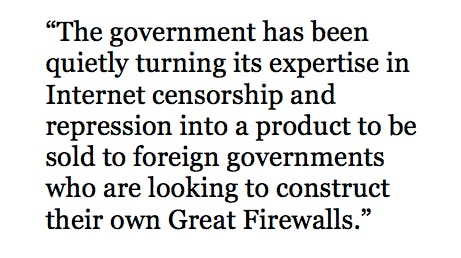 Servers on the Internet traditionally use the “shallow” stateful packet inspection, meaning they do not read the chunks of data that get sent over their networks, only the portion of the data indicating where to send it next. With deep packet inspection, the servers see the entirety of data, allowing them to peruse everything that is sent over their network—from users accessing YouTube videos about cats to personal emails.

Setting up a national deep packet inspection system is a complicated operation, but with China’s help the Zambian government could easily do so. They would then be able to not only block their citizens from visiting certain website, but to identify users that use certain keywords in searches or emails, allowing state authorities to arrest any (supposed) dissidents.

How much does such a system cost? Nobody knows for certain, but according to one report, building a Great Zambian Firewall would cost the government over $5 million.

China isn’t the first to export Internet surveillance. The United States government employs deep packet inspection (allegedly not on its own citizens) on Internet traffic and some US companies have been accused of selling monitoring and censorship technology to repressive regimes. It is a true but sad fact is that if you are reading this article from outside the US, your visit to this page has been logged by a US intelligence agency deep packet inspection system.

Governments will always want to know—and control—the information that reaches their citizens. Online, they can do it. If deep packet inspection proliferates, the Internet will become a domain where each government has total access to users’ private information online, and total control of what those users can see and do on the web.

We deserve an Internet free from government control and interference. We deserve a digital frontier where users have the right to anonymity and the right to open access to the Internet. This is what we deserve, but unless we fight for it, it won’t be what we get.