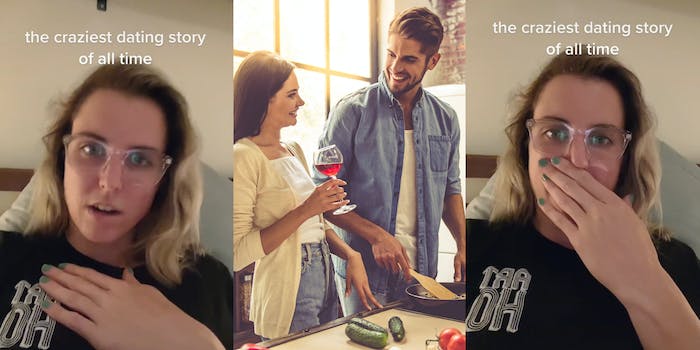 ‘Every woman who dates men needs to hear this f*cking story’: Woman says ‘friend of a friend’ was fed human meat on Hinge date at Airbnb, sparking skepticism

“This story is highly suspicious. 'Friend of a friend,' come on now!”

A woman told the story of a Hinge date that involved the ingestion of human meat, a fake name, and a staged apartment. Her story went viral, but some viewers think it may be an urban legend.

A TikTok received over 1 million views after explaining what one would consider the date from hell.

TikToker Magda Cychowski (@magdacychowski) says “a friend of a friend” went on a Hinge date with a man, who, at first, showed green flags.

She says the man and woman went on a great first date, and then he offered to cook for the woman on their second date. On their date, he allegedly mentioned he was vegan, warning her the food might taste different than what she is used to.

The woman, Cychowski claims, woke up violently ill the next day, and she went to the emergency room. After running some tests, it was discovered she ingested human meat, the TikToker continues.

Upon this discovery, Cychowski says the woman called the cops and learned the guy rented out an Airbnb under a fake name and disappeared from the apartment and all social media platforms.

“Every woman who dates men needs to hear this fucking story,” Cychowski says. “Don’t let him cook for you.”

Users were skeptical about whether Cychowski’s story is real.

One user commented, “This story is highly suspicious. ‘Friend of a friend,’ come on now!”

Cychowski replied in a video explaining that her colleague told her this story about someone that they used to work with but mentioned it was possibly a lie.

“I’m either being duped, my co-worker maybe heard this from somebody who saw a Reddit thread, and we’re all fucking dumb, but what’s scary is, like, what if this actually happened to many, many people?” she says.

Another user commented, “Urban legend. Been hearing [about] this since 2009.”

Validly enough, there is room for skepticism due to there being a story posted on Reddit three years ago with a very similar plot.

Others who took it at face value were shocked.

“Yep, definitely not letting you cook for me on the second date,” another said.

The Daily Dot reached out to Cychowski via TikTok comment.