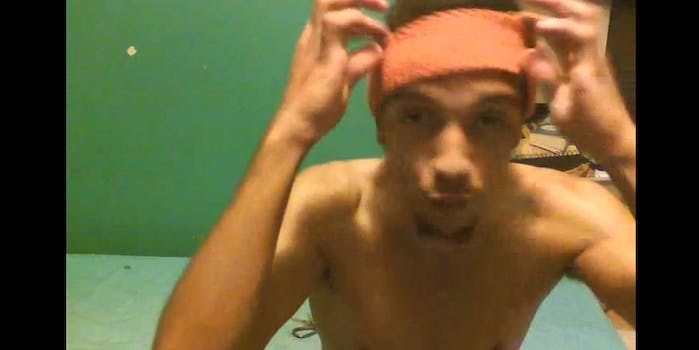 It's unclear whether the video was uploaded to YouTube before or after he was taken into custody.

It’s not uncommon for hip-hop artists to rap about the events that give them street cred. 50 Cent has talked about being shot nine times and surviving. Jay Z and Notorious B.I.G. made no secret of their drug-dealing past. Now you can add Adequate Advocate—a young rapper from Fort Collins, Colo., named Josh Jackson—to that list.

On Monday night, Jackson locked himself inside his room and started spitting rhymes about how the cops were after him. He wasn’t joking either. The SWAT team had just surrounded his home after one of Jackson’s roommates called the police because he had threatened them with a knife.

“Bring the motherfucking SWAT Team, special weapons and tactics… I don’t give a fuck because I’m nineteen,” he bragged mere seconds before a flash bang grenade went off.

The authorities eventually subdued and arrested Jackson on felony menacing charges. It’s unclear whether the video was uploaded to YouTube before or after he was taken into custody.

According to Fort Collins Police Capt. Jerry Schiager, this isn’t Jackson’s first encounter with the authorities.

“He’s got a history of resisting the police in the past,” Schiager told the Coloradoan.

The budding rapper is scheduled to appear in court on Aug. 13.