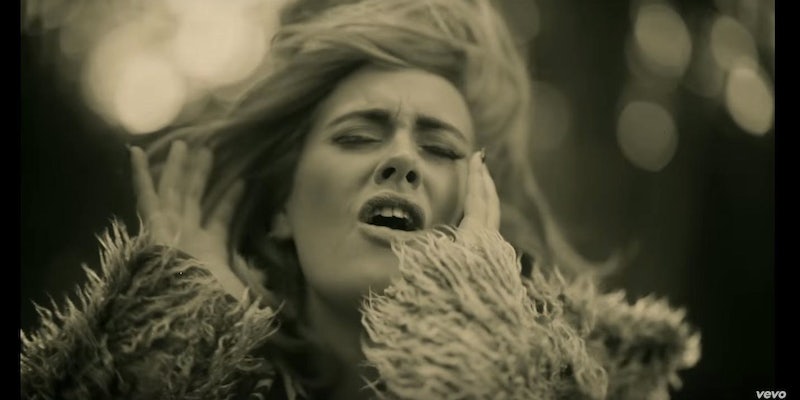 Why is Adele using a flip phone in the ‘Hello’ video? An investigation

4 reasons why Adele turned to this pre-Obama tech.

The world was not ready on Friday when Adele surprised her legion of fans (pretty much everyone with ears and a heart) with the sufficiently sultry and somber “Hello.” Tears streamed down my face even before the six-minute video was over, triggered by the feelings of nostalgic heartache that the 27-year-old songstress wields with her magical voice.

Adele’s comeback was hotly anticipated. Her 2012 Bond theme “Skyfall” has been pretty much all we’ve gotten from her in recent years, having to settle with playing “Set Fire To the Rain” and “Chasing Pavements” on repeat. While I may have been an emotional mess after listening and watching “Hello” earlier today, one little thing about the video bugged me: Why was she using a flip phone?

Literally within the first couple of seconds, we see Adele hang up and flip close the phone like it’s 2008. The phone is more advanced than a Motorola Razr but a stone compared to an iPhone 6S.

I have several theories that may explain this “vintage” technology Adele has turned to in order to contact who audiences understand to be a past love (on face value).

1) Adele is a drug dealer

The only people I know who use a flip phone are drug dealers, my friends’ relatives who live in Mexico, and people in really involved adulterous relationships. While the latter two possibilities do have some weight of possibility, it’s more likely the singer moonlights as a plug.

Furthermore, Adele croons: “I’m in California dreaming who we used to be when we were younger.” California, Adele? We’re not clueless, we know what happens in the weed mecca of the United States.

The video has that weird overlay tone that connotes ~oldish~ with respect to this past lover. But it could suggest that these moments actually occurred when flip phones were fashionable. We don’t see any of today’s modern technology in the music video such as Hyperwalks or an Apple Watch, just an old-fashioned tea kettle and stove.

This is also supported by the fact that her old beau also is using a flip phone. But that could also mean that they’re both drug dealers too.

3)  Adele keeps all her dick pics on a burner phone

Although keeping salacious pics and videos on a flip phone may decrease the quality of these treats from a flame, they ensure that a current lover won’t stumble across some nudes or they won’t get accidentally shared to Facebook.

It’s very Ilana from Broad City, who also keeps all of her “sex media” on a burner.

4) Adele is a witch on the run

Adele has already revealed that she can set fire to rain, but in this video she is also seen controlling the element of wind. Take a look:

It is likely that she knows that the witch hunters and/or other possible Grammy nominees after her could track Adele if she had a smartphone with location services. This is why she has gone with the classic flip phone to keep them hot off her trail and is now summoning the powers of the winds to keep her safe. Meanwhile, she has hit up a past warlock lover to possibly house her and figure out her next move.

A combination of all four theories is just as possible—because we know that this woman can do anything.