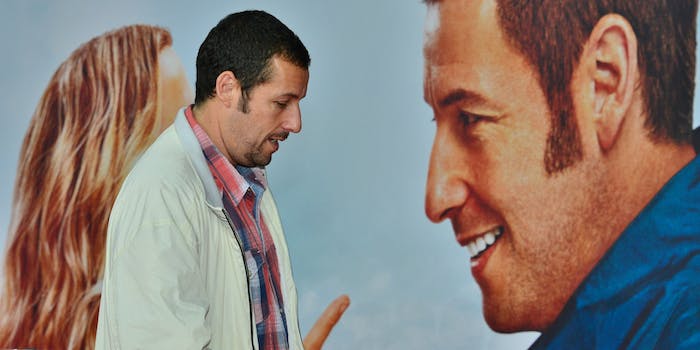 Why Adam Sandler is having a long overdue backlash

If Blended's failure has brought Adam Sandler to a fork in the road, let’s hope he chooses the right direction.

Adam Sandler is usually one of America’s most reliable movie stars. As a box office draw, there are few comedic actors whose movies consistently perform better than his, with his films routinely making over $100 million domestically. Despite several notable flops, he has remained a Hollywood mainstay for over decades.

But with the failure of his most recent vehicle, the South African-set family comedy Blended (co-starring former onscreen love interest Drew Barrymore), it’s worth asking whether Sandler’s schtick has finally started to lose its charm. Not only was the film’s opening the second worst of his career, it was his worst ever for a PG-13 title, one which should have in theory appealed to a wide audience.

At least one group of people have been fed up with Sandler’s antics for years: critics. Although there were a few reviewers who found Blended mildly tolerable, most have been unsurprisingly harsh on his latest cinematic attempt (A.O. Scott of the New York Times in particular has received attention for his vicious takedown of the film.)

Blended isn’t likely to go down in history as Sandler’s most notoriously bad movie (it’s hard to imagine that won’t be Jack and Jill), but it does feel like it could be a turning point in his career.

Emily Yahr of the Washington Post observed that Blended’s biggest issue in many ways is its desire to capitalize on ‘90s nostalgia by reminding people of The Wedding Singer (a romantic comedy which in turn capitalized on ‘80s nostalgia); that film was Sandler and Barrymore’s first film pairing—generally considered to be one of the higher points of his career.

But whether people remember The Wedding Singer fondly and want to see its two leads together again or not, Sandler’s career is indeed in trouble if he can no longer capitalize on ‘90s nostalgia (something that the Internet age never seems to tire of). People want to see the guy from Billy Madison and Happy Gilmore. They want to see the guy from SNL. However, if audiences forget that’s the same guy who also starred in Just Go with It, Sandler might have a problem.

None of this is helped by Sandler’s confirmation last week on Jimmy Kimmel Live that his movies are essentially just paid vacations, a theory that many have suspected to be true for a long time. When Kimmel asked him if this was the case, Sandler freely admitted, “I have done that since 50 First Dates,” his second collaboration with Barrymore, which was set in Hawaii.

However, if you’re going to stop being a Sandler fan, this isn’t the reason to do it. Celebrities are privileged; this is simply a fact of life. The bigger the celebrity, the greater the privilege. Even besides making large sums of money, the perks of giant celebrity are seemingly endless.

There are, of course, downsides to celebrity too. Suggesting that celebrities don’t deserve their privacy, or to be treated with the same human dignity we should treat everyone else with, is wrong and cruel.

There has been a lot of talk lately about how just because someone is famous, that doesn’t make it okay to harass or belittle them. After all, they’re only human. But just because celebrities are people doesn’t mean they’re people like us. Adam Sandler gets to take lavish vacations at major movie studios’ expense and put in a minimal amount of effort to make bad movies while he’s at it, because that’s the way Hollywood works.

And if you’re not a part of Hollywood, you really can’t complain. You don’t have to see his movies, and you’re well within your rights to think they’re obnoxious and that he’s lazy—but writing Sandler off just because of the perks which his celebrity allows him is pointless. If you’re going to do that, you might as well write off every other major Hollywood celebrity; by virtue of the system, they’re all more privileged than the average person.

A better reason to denounce Blended other than the minor detail that it’s another excuse for Sandler to take a trip is the film’s cloying stereotypes. In the past, critics have mostly found Sandler’s films merely derogatory towards one’s intelligence. But Blended is troubling on a whole new level. Vulture’s David Edelstein puts it best in a review entitled, “This Is Not Adam Sandler’s Worst Film, But It Is His Most Offensive.” Edelstein shrewdly writes of the characters:

Only the man can teach the woman’s hyperactive, insecure younger boy to be scary-aggressive on the baseball field. Only the woman can turn the man’s supposedly fugly tomboy daughter (Bella Thorne) into a teen goddess in short little dresses who can actually attract a guy.

And these lessons are learned on a trip to a South African resort, where black people in resplendent purple smile, sing, pop their eyes, flex their biceps, and basically exist to teach white people how to fall in love. Ooh, they are so fuuuunnny, these happy Negroes, always popping up to encourage Jim and Laura to blend their families, because that, dontcha know, is what life is all about.

Adam Sandler would hardly be the first person in Hollywood to turn around a string of failures. On the horizon, he not only has a film called The Cobbler, from actor-turned-indie-director Thomas McCarthy, but he will also be part of the latest dramedy from Jason Reitman, Men, Women, & Children.

These films wouldn’t be the first time Sandler has taken a dramatic turn throughout his career. He played a dour version of himself in 2009 when he starred in Judd Apatow’s divisive cancer comedy, Funny People. Before that, he portrayed a man who lost his family on 9/11 in 2007’s Reign Over Me. James L. Brooks also took a crack at unleashing serious-Sandler with 2004’s Spanglish. And all the way back in 2002, Sandler delivered his most acclaimed performance of all in Paul Thomas Anderson’s critically lauded Punch-Drunk Love.

Nevertheless, in between these films Sandler has always reverted back to his traditional style of mass-appeal comedy, and it seems more than likely he will do so again.

In this sense, his career is comparable to that of Nicolas Cage’s. Cage won an Oscar in 1996 for Leaving Las Vegas, before retreating to the more hammy action roles he’s known for today. And yet in the midst of his sillier output, Cage has also delivered some of his best work. The difference is that Sandler’s heavier performances always feel like a reach for him, as if he’s still striving for that one game-changing moment, while Cage appears to stumble into his greatest characters, blindly taking on everything just to keep working.

Like much of Adam Sandler’s recent output, Blended is a bad movie. If its failure truly has brought him to a fork in the road, let’s hope he chooses the direction that will finally bring him to that great performance. But for the moment, Sandler is still a huge star, and if his long, strange career proves anything, it’s that huge stars have a way of refusing to extinguish. No matter how lazy they are.