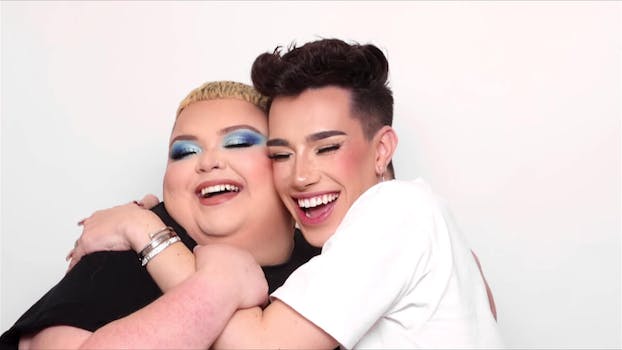 Ray, who plays 'Rosa' on TikTok, has since defended the collab.

TikTok star Adam Ray Okay, known for his comedic “Rosa” videos, sat down to get interviewed and glammed-up by YouTuber James Charles, stirring a ton of controversy online.

In the video, posted to YouTube, Charles scrubs away Ray’s signature “Rosa” contour makeup and applies a glamourous blue-eyeshadow look, while asking the TikToker questions about his rise as an internet celebrity. Charles also made sure to ask Ray how he felt about others impersonating his “Rosa” character, likely a move to try to clear the air after many accused Charles of cultural appropriation when he made his own Rosa video.

The interview amassed millions of views within hours of being uploaded, stirring backlash from Ray’s fans who were outraged by his decision to collaborate with Charles, who has repeatedly been at the center of controversy.

“Why’d Adamrayok have to ruin everything by going on James Charles channel?” one Twitter user questioned.

Others called out Ray for “selling out.”

“Well, the Rosa videos were funny while they lasted but selling your soul for a racist & a couple of YouTube views is more important. RIHANNA ACKNOWLEDGED YOU, INVITED YOU TO THE FENTY HOUSE FOR YOU TO PICK…. JAMES CHARLES??” user @HeyJedz tweeted.

Others suggested that the TikTok star should avoid being associated with Charles because of his reputation.

“You aren’t doing the community any favors by teaming up with an unapologetically racist and predatory influencer. Coming from a city that is statistically ~80% racial minority you should want to avoid associating yourself with someone who has a reputation like James Charles,” user @leahhtbh tweeted.

Ray responded to the backlash with a tweet celebrating his success and calling for positivity from his fans.

“I take SO MUCH pride in who I am and where I come from. I’m so fucking happy I can represent my community all around the world to millions of people. If you don’t see the greatness in what I’ve been doing… idk what to tell u. Remain positive or leave,” he wrote.

Rosa, though, has yet to address the controversy.