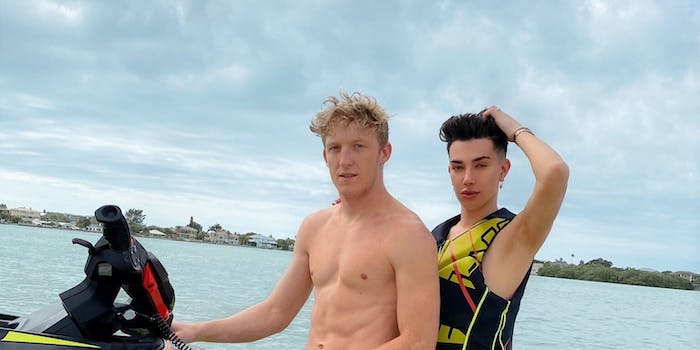 Even Tfue's ex-girlfriend weighed in.

Beauty vlogger James Charles was in need of a Valentine’s Day date, so the YouTube star asked the Twitter universe for help. That’s when gamer Tfue raised his hand. Now, after an intimate photo of the two was posted online—Charles is scooched behind Tfue as they pose on a jetski—fans seem to really want the two to be together romantically.

The story began last week when Charles put out a seemingly desperate online plea, writing, “Ok so who’s gonna take one for the team and be my valentine.”

Tfue, whose real name is Turner Tenney, responded with a wave.

Charles said he was cool with that and asked where their date would be.

A few days later, Tfue—who used to date Corinna Kopf—posted the photo of the two of them posing together in Tampa, and he wrote, “it never hurts to shoot your shot.”

Now, fans really want to make this relationship happen in real life between the two YouTubers who combine for more than 28 million combined subscribers and 7.3 million Twitter followers.

But not everything has been perfect in their worlds. Both have also been recently accused of using the N-word. For Tfue, that occurred last September when he was streaming himself playing Minecraft—in 2018, Twitch banned him from 30 days for using a racial slur—and Charles apparently said the slur during a New Year’s Eve party when he and his friends sang Saweetie’s “My Type” while at a club.

Tfue is also reportedly still in the middle of a lawsuit he filed against FaZe Clan over a contract dispute.

But hey, maybe love rules all anyway. At least until an ex takes notice.

As Kopf wrote, “yoo why is james charles at my ex’s house all the way in florida?”