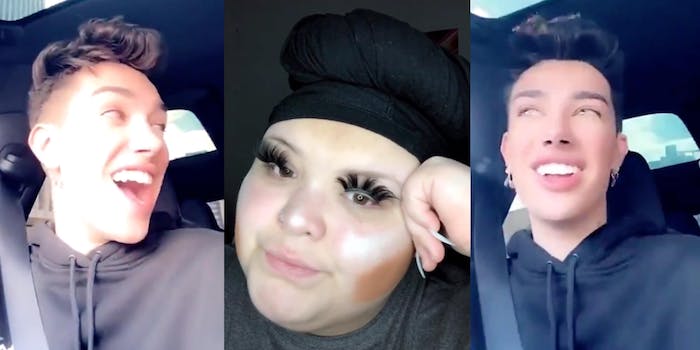 'I hope you know making fun of a Latinx accent like this is racist.'

In the video, Charles tries to imitate the Latinx character’s accent and mannerisms. The original TikTok from @adamrayokay is captioned, “POV: Rosa finds out her 8th period partner is gay.”

As a character and concept, Rosa has turned into a relatable meme for many with Latinx ties.

Charles eventually deleted his imitation video of Rosa, but not before people could save it and share it across Twitter.

“James Charles I hope you know making fun of a latinx accent like this is racist and that when the OG Rosa does it it’s not cause he is Latinx,” Twitter user @HectorUCalzada wrote. “Tired of his white ass profiting and making fun of POC.”

Another likened the remake to cultural appropriation.

The difference between a member of a community making jokes about the stereotypes associated with such communities, and outsiders doing it, is one of the main points of contention for people who are “canceling” Charles.

“We are celebrating and finding the humor in the fact that most of us know ppl who are like rosa and marlene etc. We grew up with them in the neighborhood or in family, in school,” Twitter user @northernbruja wrote. “For us its all love but james charles is just icky so I’m not about it. Feels more like mocking and rejoicing in stereotypes tbh.”

Charles has yet to address the backlash.