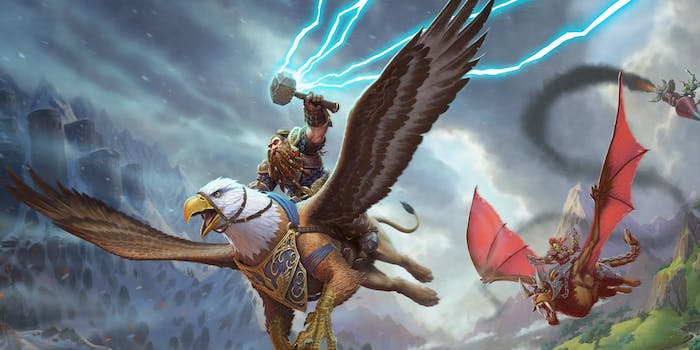 In the midst of a shocking sexual harassment and discrimination scandal at the video game company Activision Blizzard, the team behind World of Warcraft released a statement voicing support for the women who came forward and promising to make Warcraft more inclusive. This arrived the same day as Activision Blizzard workers walked out in protest against their employers, appalled by the allegations coming to light.

These allegations became public due to a lawsuit against Activision Blizzard, the parent company for the studios behind several A-list gaming properties including Call of Duty, Diablo, Guitar Hero, Overwatch, and World of Warcraft. The company is accused of creating an abusive work environment where women faced constant sexual harassment, including “cube crawls” in which drunk male employees would harass their female coworkers, and one instance in which a female employee took her own life during a business trip with a male supervisor after her colleagues shared nude photos of her at a holiday party.

The game developer Blizzard was highlighted for its “frat boy culture,” such as the existence of the so-called “Cosby suite,” named after Bill Cosby who recently had his sexual assault conviction overturned but has been accused by 60 women of sexual assault or harassment. This hotel suite at the 2013 BlizzCon convention was allegedly used by former Warcraft designer Alex Afrasiabi to sexually harass women under the guise of professional networking. (Afrasiabi was fired for “misconduct” in 2020.)

Other Blizzard employees knew about the room, and Kotaku obtained photos, social media comments, and inside sources reporting that it was a party room used by many people, some of whom joked about hitting on women at the convention. Some sources argued that the suite’s nickname was actually a reference to the rooms having old-fashioned decor like Bill Cosby’s signature sweaters, but the prevalence of Cosby jokes and sexual harassment still played into Blizzard’s allegedly unsafe and unwelcoming atmosphere for women.

This lawsuit is already a huge scandal within the games industry, with some gamers organizing boycotts against Blizzard Activision games in support of the employee walkouts. While its parent company struggles to control the fallout, World of Warcraft shared a public statement representing the sentiments of its own internal team. It describes the past few days as a period “full of sadness, pain, and anger, but also hope and resolve,” promising to “heed the brave women” who came forward with allegations of discrimination and harassment.

The statement also pledged to make Warcraft more inclusive, including the removal of “references that are not appropriate for our world” within the franchise. There’s speculation that this will involve changing or deleting characters created by Afrasiabi, which now make some players deeply uncomfortable. Some elements of the Warcraft franchise have already faced criticism for their misogynistic content, such as a quest involving the torture of a semi-nude female monster.

The Blizzard Activision lawsuit is reawakening many ongoing conversations about sexism and discrimination in the games industry, highlighting harassment scandals at other companies and public incidents that shaped people’s view of Blizzard as a particularly non-inclusive brand. One viral incident involved a video from BlizzCon 2010, in which a woman asked an all-male Blizzard panel about the sexualization of female characters in World of Warcraft, commenting that they all looked like Victoria’s Secret models. The question was delivered in a friendly manner, avoiding an accusatory tone, but the panelists refused to take it seriously, cracking jokes about the sex appeal of Warcraft‘s women.

One of the original panelists, former World of Warcraft lead designer Greg Street, responded with an apologetic Twitter thread last week. “Look, it was a shitty answer at the time and it certainly hasn’t aged well,” he wrote. But while this was a relatively minor incident compared to the allegations in the Blizzard Activision lawsuit, this video still helps to confirm Blizzard’s image as a sexist brand that requires intensive, wide-ranging improvements to its workplace culture.

Update 1:109pm CT, July 29: When reached for comment, Activision Blizzard pointed the Daily Dot to CEO Bobby Kotick’s public statement to employees on the matter. In the July 27 statement, Kotick thanked “all those who have come forward in the past and in recent days” and called it a “difficult and upsetting week.”

“We are taking swift action to be the compassionate, caring company you came to work for and to ensure a safe environment,” Kotick said, noting the company is working with “law firm WilmerHale to conduct a review of our policies and procedures to ensure that we have and maintain best practices to promote a respectful and inclusive workplace.”

“There is no place anywhere at our Company for discrimination, harassment, or unequal treatment of any kind,” he said. “We will do everything possible to make sure that together, we improve and build the kind of inclusive workplace that is essential to foster creativity and inspiration.”