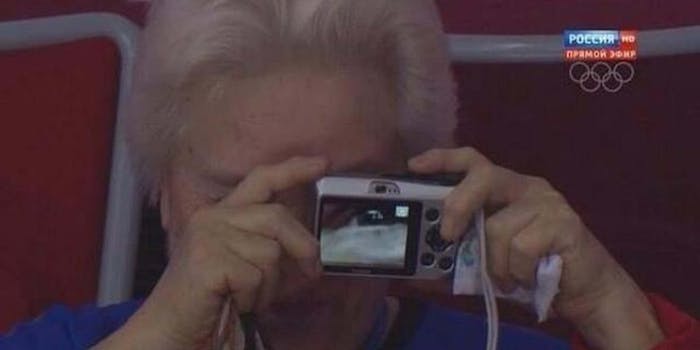 Before you judge, give your own photo gallery a look.

It’s been called the greatest photo of the Olympic games—yet it involves exactly zero athletes. Here it is:

A woman attempting to take a picture at a hockey game in Sochi today. This may be one of my favorite pics ever. pic.twitter.com/x2X20ebCdq

The original tweet has gone viral, and there are a few remixes out there gaining steam.

As you can see, she has the camera facing the wrong way, and the screen is displaying her eyeball. Don’t pretend you haven’t been there: We’ve all gone to take that sunset photo to see our own faces staring back at us, an unsettling reminder that we forgot to switch the camera back to front-facing after last night’s selfie sesh.

So I found this this morning, must’ve taken an accidental selfie on the walk home… #NYE pic.twitter.com/1va23Rn1K9

This guys daughter was proposed to and he missed the moment by taking an accidental selfie im crying hahahahahah pic.twitter.com/TrOwcm0Sp8