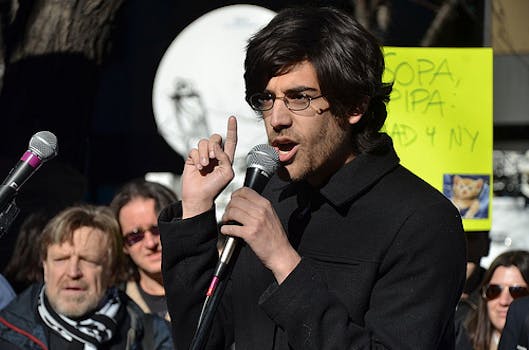 The petition, “Remove United States District Attorney Carmen Ortiz from office for overreach in the case of Aaron Swartz,” reached the number of signatures required to merit an official response.

The death of activist and open Internet pioneer Aaron Swartz at his own hand has had ripple effects far beyond his circle of family and friends.

Charges against Swartz for theft of JSTOR data from MIT were dropped, and Anonymous launched a hacking offensive against MIT and the Department of Justice that knocked their sites offline for a while.

Now, a group of people angry at U.S. Attorney Carmen Ortiz’s prosecution of Swartz, which many people believe contributed to his suicide, have helped a petition on the White House’s We the People platform achieve the necessary 25,000 signatures to prompt an official response, in only three days.

The petition, titled “Remove United States District Attorney Carmen Ortiz from office for overreach in the case of Aaron Swartz,” asks the president to do just that.

“A prosecutor who does not understand proportionality,” it reads, “and who regularly uses the threat of unjust and overreaching charges to extort plea bargains from defendants regardless of their guilt is a danger to the life and liberty of anyone who might cross her path.” As a political appointee, Ortiz can be asked by the president to resign.

Swartz was facing as much as 35 years in prison and a $1 million fine.

Despite MIT itself, the owner of the JSTOR educational data Swartz allegedly hacked, forswearing any need to charge Swartz after they reached accommodation with him, Ortiz soldiered on, saying “Stealing is stealing, whether you use a computer command or a crowbar, and whether you take documents, data or dollars.”

The petition’s author, Larry Price, a programmer from Oregon, put it this way on Hacker News.

“Being a federal prosecutor isn’t just a job, it’s a privileged position of power… And one of the things that goes with the unbridled power to decide who to indict and what charges will be brought; is the responsibility to use that power appropriately. Anyone who does not understand that responsibility should not be allowed to pass the bar, much less be handed the power to ruin lives with relative impunity.”

In addition to the alleged disproportionality of the prosecution, a couple of other cringeworthy activities have drawn notice. Ortiz’s husband, IBM executive Tom Dolan, has been tweeting to defend his wife in a way that could only be described as insensitive.

“Truly incredible that in their own son’s obit they blame others for his death and make no mention of the 6-month offer,” he posted, referring to the statement issued by Swartz’s parents and a plea bargain he was allegedly offered.

As BetaBeat noted, the U.S. Attorney’s office declined to make a statement, telling NBC News, “We want to respect the family’s privacy at this time.” Comments like those Mr. Dolan is making, given his relationship to Ortiz, are poorly considered, if not suspicious.

Perhaps it was less Swartz’s crimes than his philosophy—which some find offensive, even dangerous—that inspired the “disproportionality” of punishment in Ortiz’s office.

“Those with access to these resources — students, librarians, scientists — you have been given a privilege,” Swartz wrote in 2008. “You get to feed at this banquet of knowledge while the rest of the world is locked out. But you need not — indeed, morally, you cannot — keep this privilege for yourselves… (T)hose who have been locked out are not standing idly by. You have been sneaking through holes and climbing over fences, liberating the information locked up by the publishers and sharing them with your friends.”

At the time of writing, the petition had reached just over 30,000 signatures. Unfortunately, as the Daily Dot has previously noted, goofy and inconsequential petitions seem to have a better chance of a response than serious ones. And this is a cause not to be taken lightly.