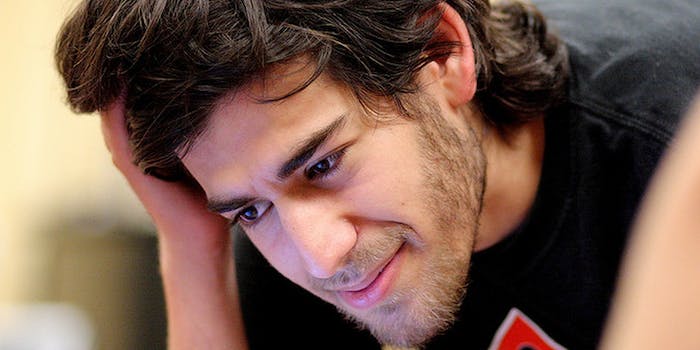 In support of Aaron Swartz's legacy and his family, Anonymous has launched #OpAngel, carrying on his crusade of Open Access and Internet freedom

Internet and Open Access pioneer Aaron Swartz’s suicide last week has drawn attention to the government’s aggressive prosecution of pro-piracy Web activists. In support of Swartz’s legacy and his family, Anonymous has launched #OpAngel, carrying on his crusade of Open Access and Internet freedom, and specifically warning the Westboro Baptist Church against their alleged plan to picket his funeral and memorial service.

Anonymous’s response was swift and unequivocal. Issuing a YouTube video and Pastebin transcript, it announced OpAngel to carry on Swartz’s crusade and beat back the WBC.

Operation Angel has a number of goals. First, we mean to facilitate the flow of information regarding the cult’s movements. We are encouraging the public and any members of Highland Park law enforcement with intel on the cults to email that information to [email protected] You can use an anonymous email address. You will not receive a response. You will not be exposed.

The second phase of this operation will begin after Aaron is laid to rest. Partnering with other organizations, Anonymous intends to pursue reform within the DOJ and other government agencies to prevent the kind of unnecessary harassment that Aaron Swartz was victim to. Some of the brightest men and women in the fields of information technology and security are being targeted by agencies that lack a basic understanding of the so-called crimes they are accusing people of. We will do this for Aaron Swartz and everyone like him. 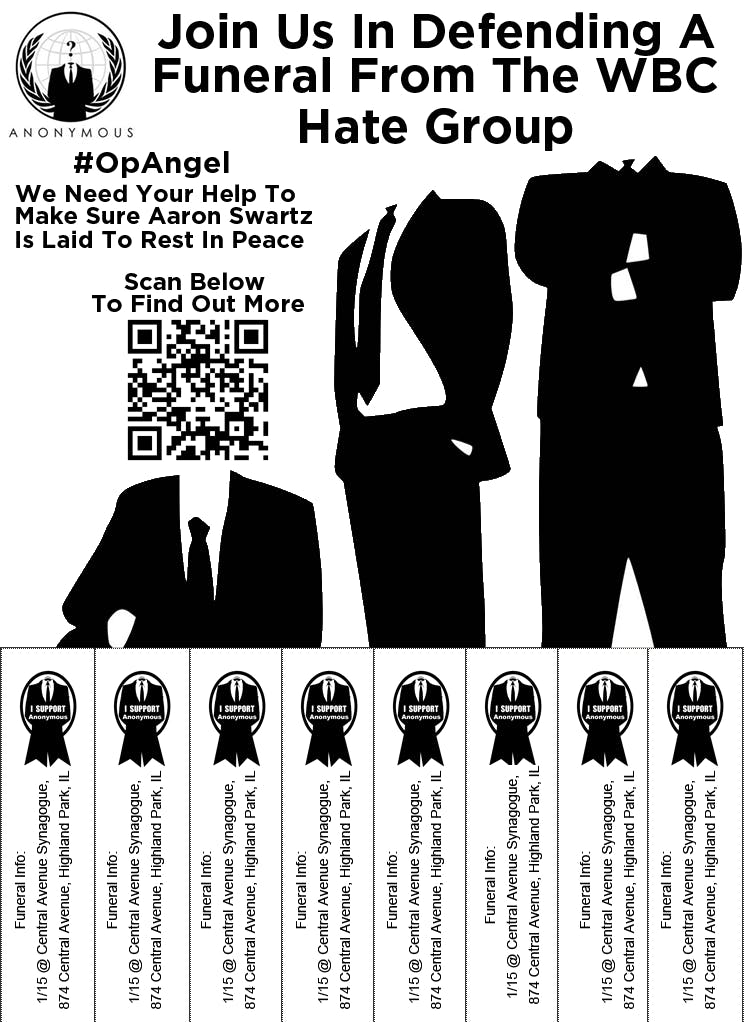 Participants in OpPaperstorm, the postering arm of Anonymous also created flyers to encourage people to speak out and to take direct action, such as forming human walls between the WBC and mourners at the funeral, which is due to take place Tuesday.

Two petitions to the White House have also been created and are being tweeted as part of OpAngel: One to fire the prosecutor, Carmen Ortiz, for criminally overreaching and driving Swartz to suicide; the other to posthumously pardon Swartz.

Swartz was not a hacker in the traditional sense: he was a coder, an inventor, and an experimenter, but not someone who rejoiced in gaining access to restricted information—although he did believe that information should be free. As the author of the Guerrilla Open Access Manifesto, the inventor of RSS, and a founder of the Creative Commons organization, among many other endeavors, he worked to enable the spread of information posted by those willing to share, not crack open infosafes.

The “hack” of academic publication site JSTOR was simply a matter of copying publicly funded scientific papers to which he had legal access, and making it available to people outside the limited number of authorized JSTOR users. JSTOR refused to cooperate with the government’s prosecution of Swartz, and currently features a condolence notice on its About page.

Since MIT, where the “hack” took place, did not repudiate the prosecution as quickly as JSTOR did, Anonymous included them with the WBC as an OpAngel target. They DDoS’d MIT.edu (along with DOJ.gov), successfully taking it offline intermittently for several hours, and defaced many pages of the site with a classic manifesto in red on black, featuring the faceless Anonymous world emblem. Also copied to Pastebin, it reads, in part:

Whether or not the government contributed to his suicide, the government’s prosecution of Swartz was a grotesque miscarriage of justice, a distorted and perverse shadow of the justice that Aaron died fighting for—freeing the publicly funded scientific literature from a publishing system that makes it inaccessible to most of those who paid for it—enabling the collective betterment of the world through the facilitation of sharing—an ideal that we should all support.

We tender apologies [sic] to the administrators at MIT for this temporary use of their websites. We understand that it is a time of soul-searching for all those within this great institution as much—perhaps for some involved even more so—than it is for the greater internet community. We do not consign blame or responsibility upon MIT for what has happened, but call for all those feel heavy-hearted in their proximity to this awful loss to acknowledge instead the responsibility they have—that we all have—to build and safeguard a future that would make Aaron proud, and honour the ideals and dedication that burnt so brightly within him by embodying them in thought and word and action.

MIT has announced that it will be holding an internal investigation into their own role in this tragedy.

Swartz’s website used to carry details of his funeral, which were linked to in the Anonymous defacements. Those details have been removed, likely to make things more difficult for the uninvited WBC attendees.

Activists as disparate as Lawrence Lessig, WikiLeaks, and pioneering sex blogger Susie Bright have characterized the 13 felony charges Swartz faced as nothing less than a governmental campaign of bullying and intimidation which would inevitably result in tragedy. On her personal blog Bright, who has testified as an expert witness, wrote:

Here’s what I have to say to the prosecuting federal attorneys in the Case: you have blood on your hands and I bet you KNEW it was a possibility all along. I wager the Justice Department understood Aaron’s suicidal and depression vulnerabilities better than ANYONE—because they make a living, a strategy, going after the weakest links, exploiting psychological deficit and isolation at EVERY TURN. You’ve done enough, you shitheads. You’ve done enough. Have you no sense of decency, sir? At long last, have you left no sense of decency?